A few years ago, most of the filmmakers and simply the fans of shooting heard amazing news. Shooting professional smooth videos with their DSLR cameras, GoPros, and even smartphones became possible.  They could do it without any special expensive accessories. The device, called a gimbal, was relatively small, compact, and comfortable to use.

Yet, it allowed making buttery smooth footage. What’s a gimbal, anyways? How does it work? Why is it good for you? Let’s look at this modern stabilizer closely and find out the answers to those questions. 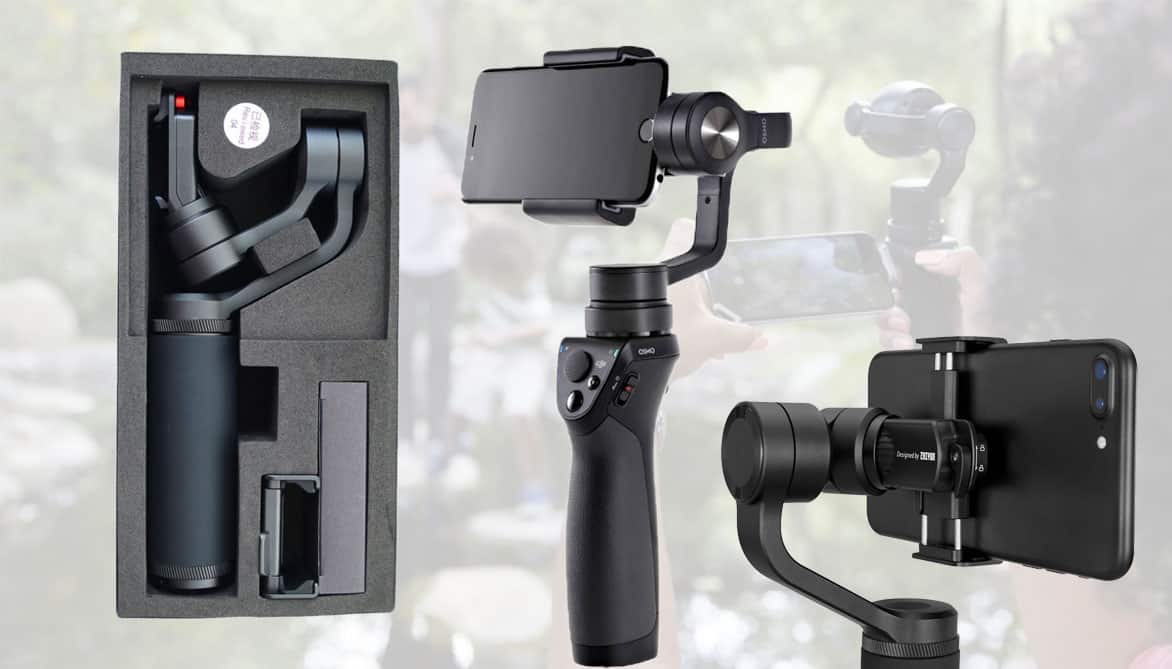 I have been interested in various aspects of photo and video production for quite a long time already. Once, when occasionally checking the feed in one of my social media accounts, I found a few impressive videos. They featured perfectly stable footage, which was clearly made on the move.

Later, I started seeing more videos like this. In one of them, a person was practicing mountain biking. In another, I saw someone running. All of those videos were perfectly stable and made on the move. The footages were extremely fun to watch.

Yet, I was very surprised. From my background experience, I knew that filming those activities would be extremely difficult. When you are practicing some kind of a sport and shooting at the same time, it is impossible to reach this kind of stabilization performance.

After some research, I found out that the videos were made with the help of the new popular device – a gimbal stabilizer. So let’s find out what is the meaning of gimbal.

What is a gimbal? This is a device that has special motors and smart detectors that help to hold and make the recording device stable. As a result, filmmakers can get a perfectly smooth and stabilized film clip even if it is being produced while moving. This is a simplified definition of the word gimbal.

A simple definition of the stabilizer’s meaning is clearly not enough to understand the complex way of gimbal operation. So how do gimbals work? Let’s dig in a little and find this out. 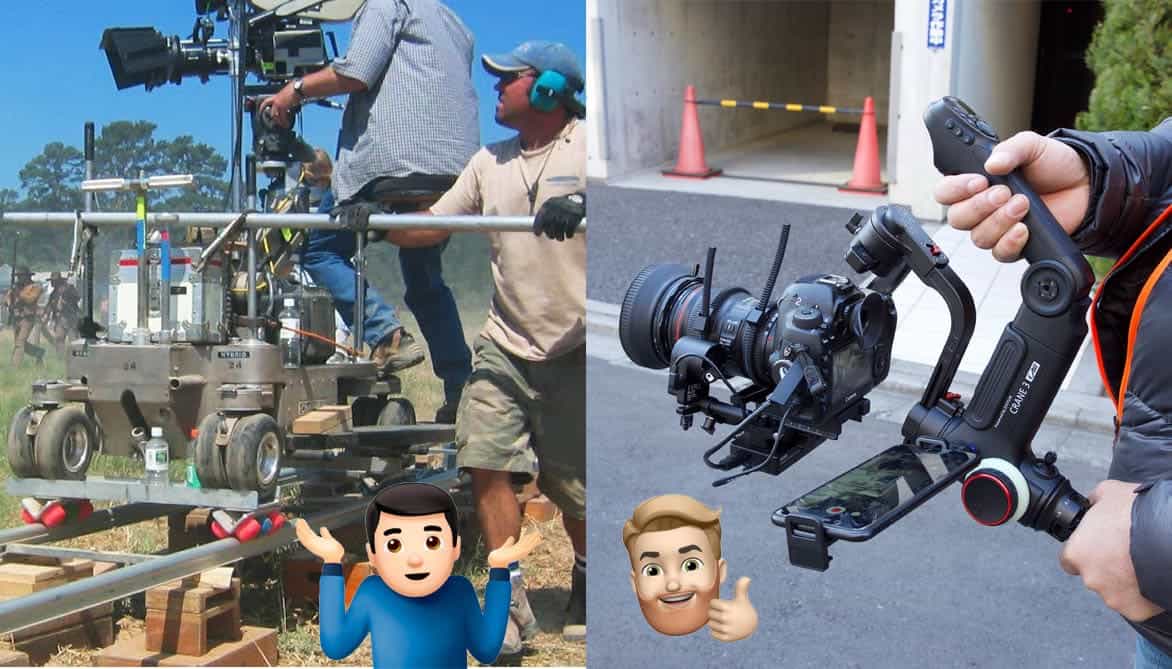 We are all aware that making the video footage stable is not something new. In fact, most of us are used to good and stable video clips. The secret of achieving this kind of stabilization quality is complex and heavy machines. They are also known as Steadicams or Dollys.

Those devices are truly complicated. To make the footage stable, they need a skilled person to manage them mechanically. This is the reason why filmmaking crews always need a professional operator, who would be able to monitor this kind of thing. It is important to notice that it is not possible to manage your Dollys or Steadicams with the help of a computer.

The gimbals are completely different. They are very smart devices that ensure that the video is smooth and silky mainly electronically. The gimbal videos are stable thanks to the fact that the stabilizers have their own intellect and a unique system for movement identification. They see the difference between the moves that a cameraman does purposefully and those unnecessary shakes.

If you still cannot believe that this device can be this smart, let’s compare it to your smartphone. An iPhone or Android also knows when you look at the screen, take it in your hands, or turn it around. Due to special smart sensors, your phone can identify most of the movements, too. How does a gimbal work? It uses a similar technology with the help of its digital detectors to achieve smooth footage.

In fact, the stabilizers are even smarter than many smartphones. In addition to those “feeling” sensors, they also can identify different types of movements. Besides this, every stabilizer features a gimbal camera mount. All of those features ensure superior compatibility of the gimbal and recording device. This results in smooth and silky footage. 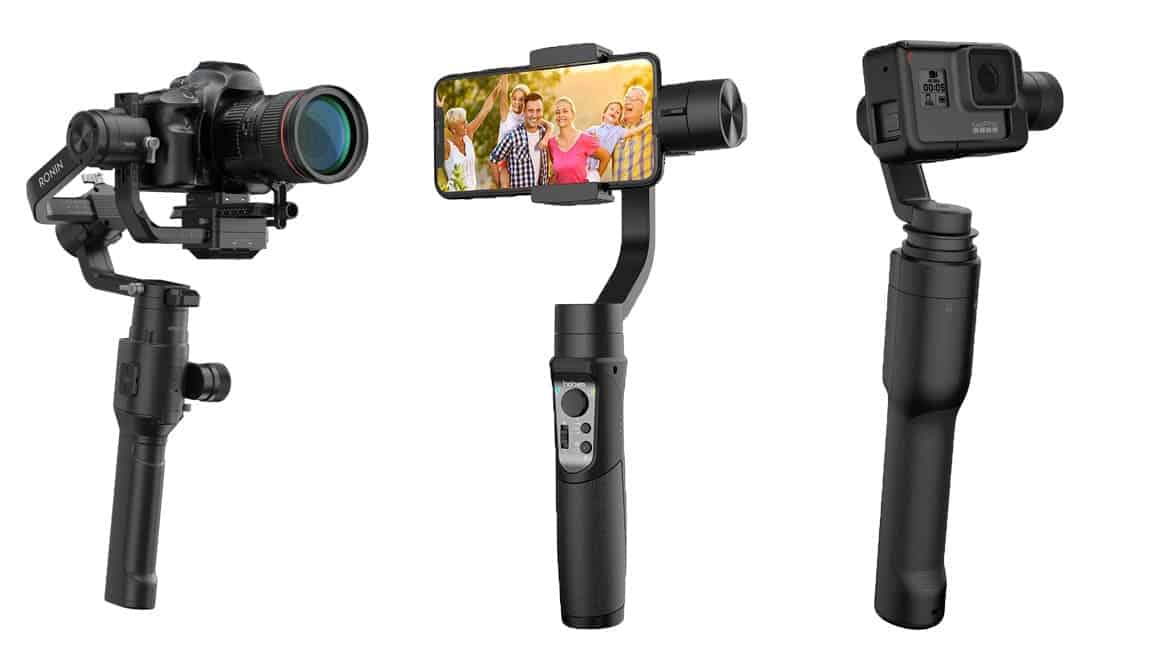 Nowadays, when gimbals are such a popular stabilization tool, manufacturers tend to make them even smarter. There are different types of devices. Some gimbals are perfectly compatible with DSLR cameras. Others are made for GoPros. Moreover, there are gimbals for smartphones.

If you are considering purchasing a stabilizer, I recommend you get acquainted with the three overviews of different gimbals models.

I do not have a Ph.D. Degree in physical science. Therefore, my explanation might seem rather simplistic to some of you. However, I believe this way I can give you at least some idea about the science behind the operation of the gimbal.

Basically, anything can make movements in three dimensions only. They are roll, pitch, and yaw. If you have even had an experience of mounting a camera to a tripod, you had to balance it accordingly in all three axes.

The video shake that is annoying when making a video is an unwanted movement made in one of those axes. So how do you eliminate that shake? It is simple – you have to make a move in the opposite direction. Thus, when we make an exact opposite movement, the picture in the video gets stable again.

How does a gimbal know how to create that exact movement? The answer is simple and complicated, at the same time. Those devices’ smart “brain” is able to receive the information transmitted from its sensors. Following this, it sends the appropriate signals to create the movements. 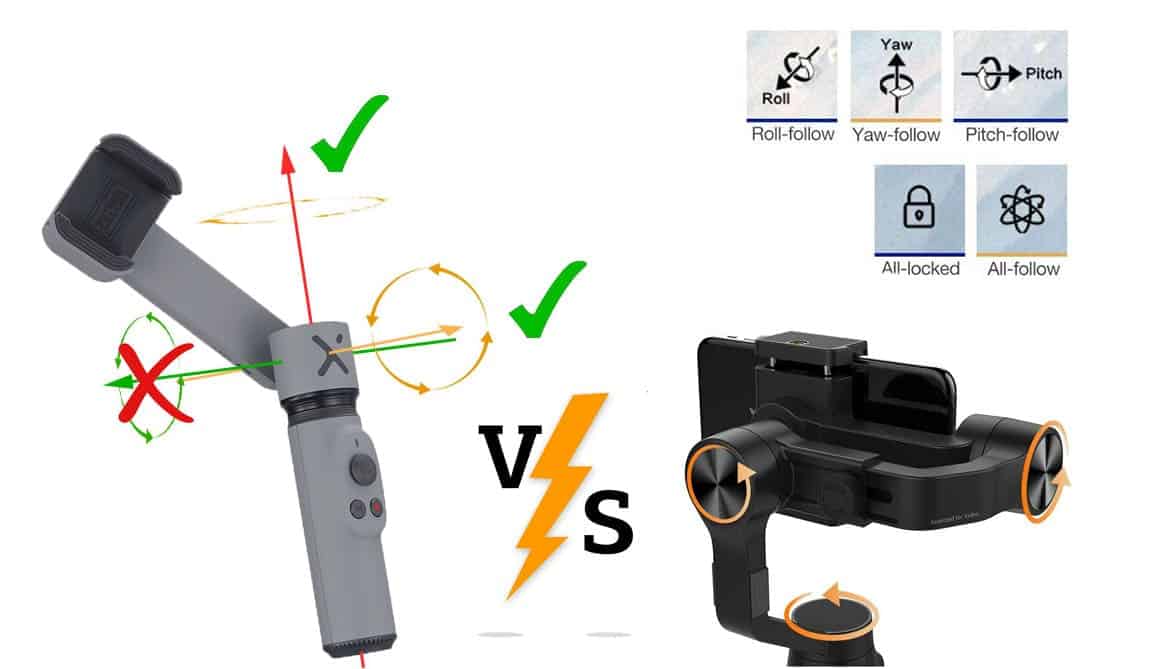 There are two main types of gimbal stabilizers available in the market today – the 2-axis gimbals and 3-axis gimbals. Of course, it is easy to assume that a 3 axis gimbal is able to provide more stable video footage. Yet, it has its own disadvantages too. Among them are a higher price and extra weight.

In most situations, the 2-axis camera gimbals provide a decent stabilization quality. It is important to understand that those stabilized camera gimbals control only the pan and roll axis. They are not able to stabilize the shakes in the tilt axes. Therefore, they can be weak if you are recording jumping movements. Also, it will not stabilize the footage if you are using the stairs while filming.

The 3-axis gimbals control the footage in all three dimensions, providing an even better stabilization quality. However, in most cases, a cameraman is also able to control the shakes mechanically. Therefore, the 2-axis gimbals are normally doing a very good job.

As mentioned above, the 3-axis gimbal camera stabilizers have their cons as well. First of all, it is heavier. This might be a problem if you intend to use the stabilizer with a camera drone. Another important thing is that a 3-axis gimbal for a camera has another motor. This significantly reduces battery performance. 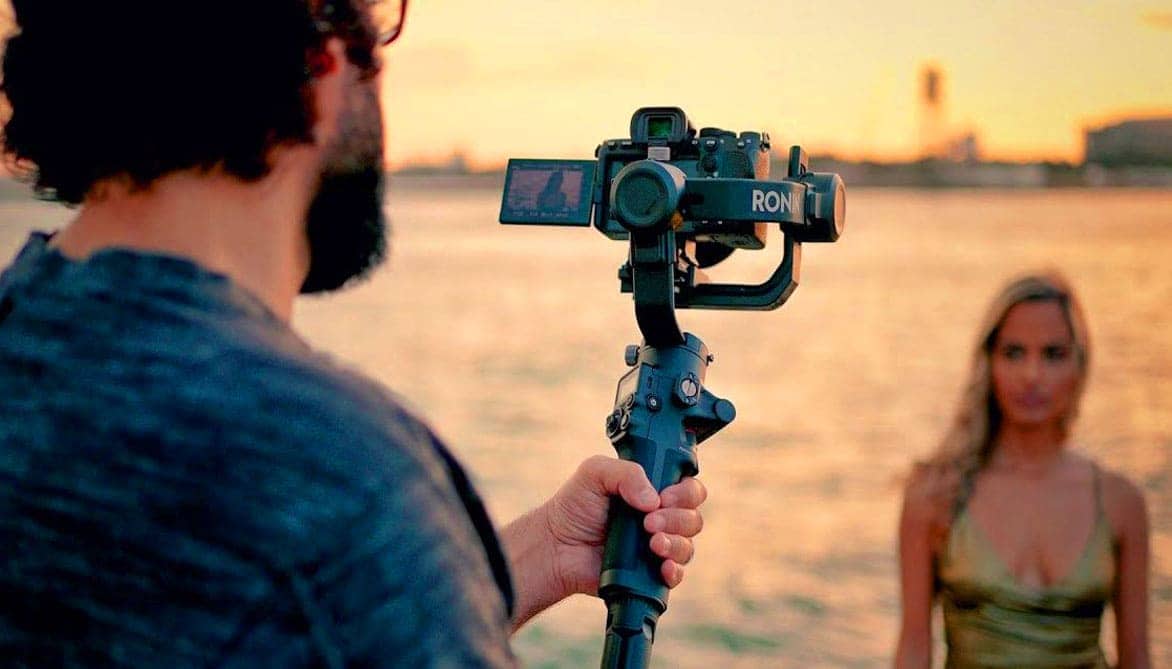 How To Use A Gimbal?

Using a camera gimbal for a stabilized video footage is not rocket science. In fact, it is very easy. Most of the video camera gimbals and other stabilizers have intuitive control panels. Once you learn how to attach your camera to the device, it will do everything for you. You will only have to find interesting setups for your shoots.

Nevertheless, there are a few important things to do before you purchase your first gimbal and start using it. The most important task is to find a stabilizer that is good for you and your purposes.

First, you need to identify what type of device you use most of the time for filming. For example, if you have a smartphone, there is a large variety of phone stabilizers for filming. They are small and compact. Most of them feature a very good stabilization quality. In the past, I have done empirical research and made a list of the best gimbals for iPhone and Android devices.

If you have a GoPro, you can consider one of the wearable or handheld gimbals. Those devices are also small and travel-friendly. There are specific models, which are easily mountable. Everyone can find a device to satisfy their needs. If you are interested to learn more about the stabilizers for GoPro, look at my guideline on the best GoPro gimbals.

Finally, if you are a professional filmmaker and own a bigger camera, there are quite a few decent models of DSLR stabilizer gimbals. Those devices were designed for professionals. Therefore, be aware that they are not as cheap as GoPro / smartphone stabilizers. Also, they are more expensive. But it is possible to find a good video camera gimbal.

✅ Read my article to learn about the best gimbals for DSLR.

It is difficult to compare the big mechanical machines for video stabilization and the smaller gimbals. Those two things are just too different and they serve different purposes, too.

For quite a long time, professional filmmakers have been using these big machines, known as Steadicams, for film production. Even now, when the gimbals became a thing, the Hollywood operators do not have another choice but keep using the Steadicams. Of course, they are more complicated, require specific skills, and have multiple tools to control their stabilization performance.

I am sure that some of the Hollywood filmmakers would be happy to use gimbals instead of the Steadicams. Yet, those devices are too little to support the huge professional equipment. Undoubtedly, the gimbals are great stabilization tools for amateur filmmakers, using GoPros, DSLRs, and smartphones.

Nevertheless, I have to say that there are mechanical Steadicams compatible with GoPros, DSLR cameras, and even smartphones. They are not as expensive as modern gimbals. However, their stabilization performance is not as great. They require more effort while filming. Therefore, I do not see a reason why one would choose a mechanical stabilizer over a modern gimbal. 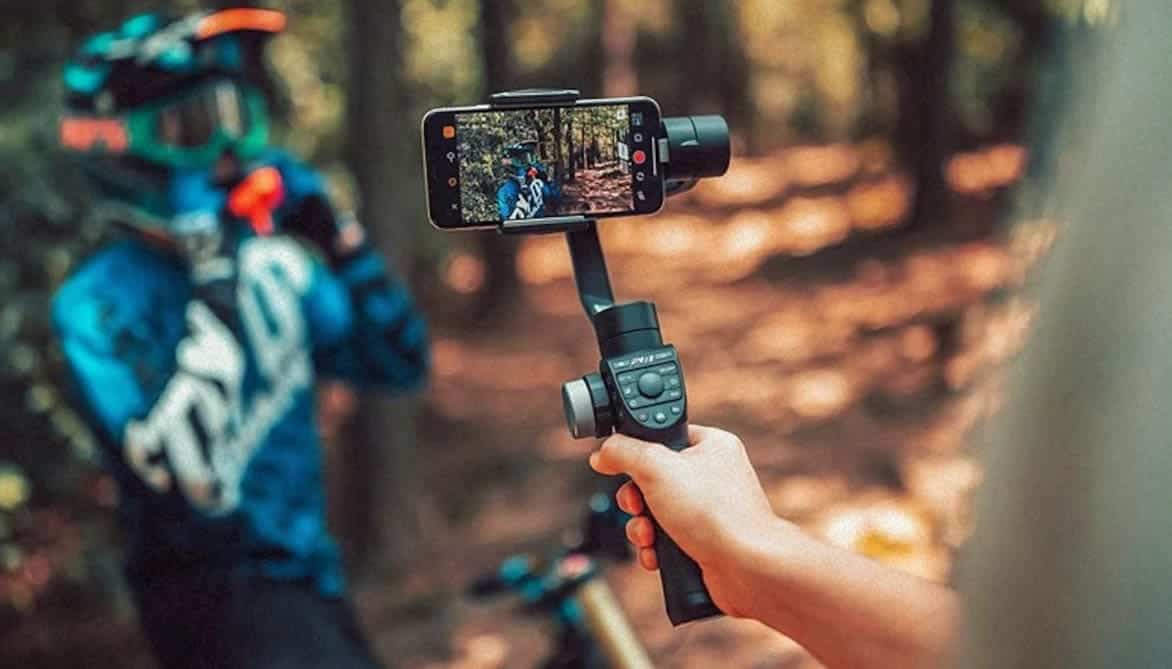 What Is A Gimbal? Effective Stabilization Tool For Everyone

There is hardly anything as important as decent video stabilization both for a filmmaker and a viewer. However, before the gimbals were invented, it was not available for everyone. Therefore, if you ask me: “What is a gimbal?”, I will have a clear answer. A gimbal is a unique and smart device that made video stabilization available to all filmmakers.

Whether you are a professional, blogger, or a beginning videographer, you will definitely find a stabilizer that will satisfy your needs. Available in all different forms and budgets, the gimbals are compact, effective, and simple to use. I recommend trying to try using a gimbal – you will fall in love with video production.