The Feiyu Tech G6 is a handheld 3-axis stabilizer for GoPros and other action cameras.

Light and compact, modern action cameras are capable of excellent photo and video quality. No wonder they are becoming more and more popular. However, it’s very hard to get smooth, jitter-free footage while holding the camera in your hands. This is where stabilizers or gimbals come into play. Today it’s an absolute must-have for vloggers and other content creators.

FeiyuTech is one of this market’s innovators. Its products always draw attention even before they hit the store shelves. However, not all of its experiments are equally successful. Personally, I was disappointed with its earlier flagship GoPro gimbal named G5. Its stabilization quality was subpar due to some serious leveling issues, especially with heavier devices. To top it off, the mounting process was a real pain in the neck.

Two years after that half-baked product, the company introduced the G6, which I’m going to review in today’s article. We’ll compare it with the previous model and discuss if the manufacturer learned from past mistakes.

This stabilizer is not particularly expensive, but I wouldn’t call it cheap either. However, the manufacturer has apparently tamed its appetites since the G5, which started retailing for $240. Due to the drop in price, the G6 doesn’t compete directly with GoPro’s own gimbal, the Karma Grip.

Given the current situation in the gimbals market, I don’t really think the company had much choice. The prices decreased significantly over the last several years. In 2016, the G5 seemed only a bit overpriced, despite all of its weak spots. However, today the G6’s more modest price tag actually sets higher expectations. Let’s see what this gadget can offer to back up its price. 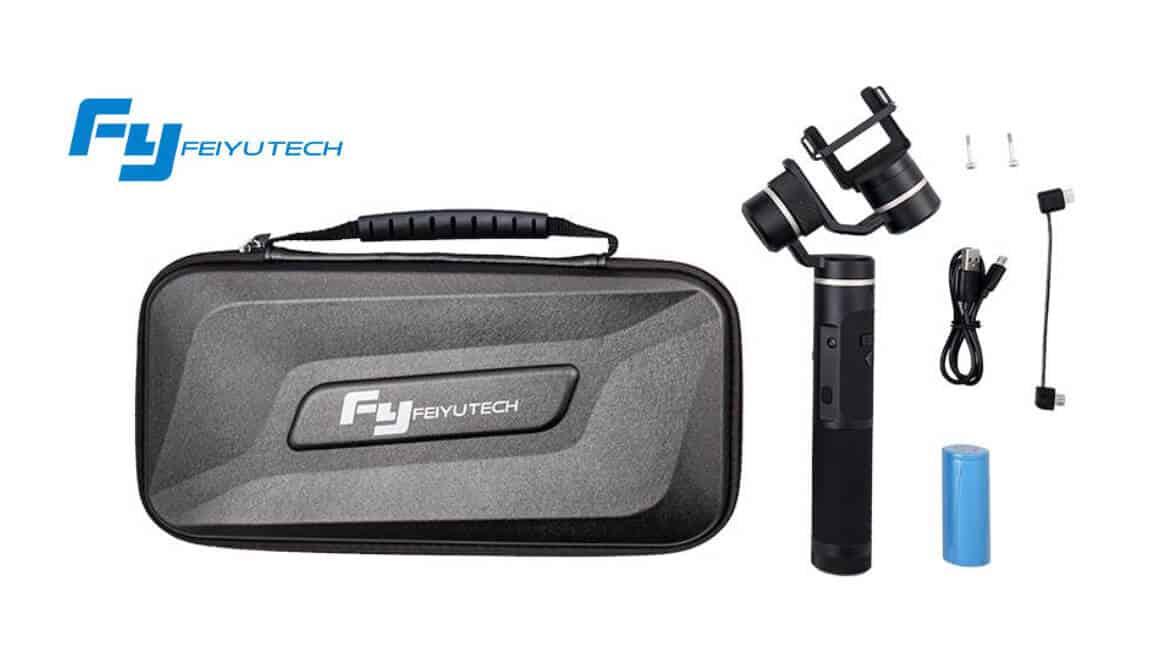 Getting acquainted with the Feiyu Tech G6

The Feiyu G6 comes in a practical carrying case with a handle, perfect for traveling. In terms of design, the gadget takes directly after its predecessor, which is fine with me. The reason I disliked the G5 had nothing to do with its appearance.

Compared with other popular stabilizers like the Karma Grip or Removu S1, this model seems quite small, although a bit on the heavy side. It has a robust metal body with a rubberized grip, convenient to hold over long periods of time. The gimbal can also boast IP67 protection, so it’s splash-proof. This doesn’t mean you should take it underwater, but at least you can safely use it on a rainy day. You also don’t have to worry about sand, dust, or dirt.

The control system, only including a few buttons, is well-placed and very simple. The latter might be a drawback for advanced videographers who appreciate quick access to as many fine settings as possible. However, this particular device is mostly designed for casual users. If you are not interested in the technical aspects of filming, you don’t need a complicated system that will take some time to learn. This model is easy to figure out within minutes, even if you have no previous experience with gimbals.

Frustratingly, the mounting design I complained about has stayed the same. Most modern stabilizers let you just slip your device right in and get going. This one actually makes you loosen and tighten two hand screws every time you install or remove the camera. This is not necessarily a huge problem, but it does feel awkward and somewhat outdated. In addition, the gimbal’s paint is easy to scratch with the screws. 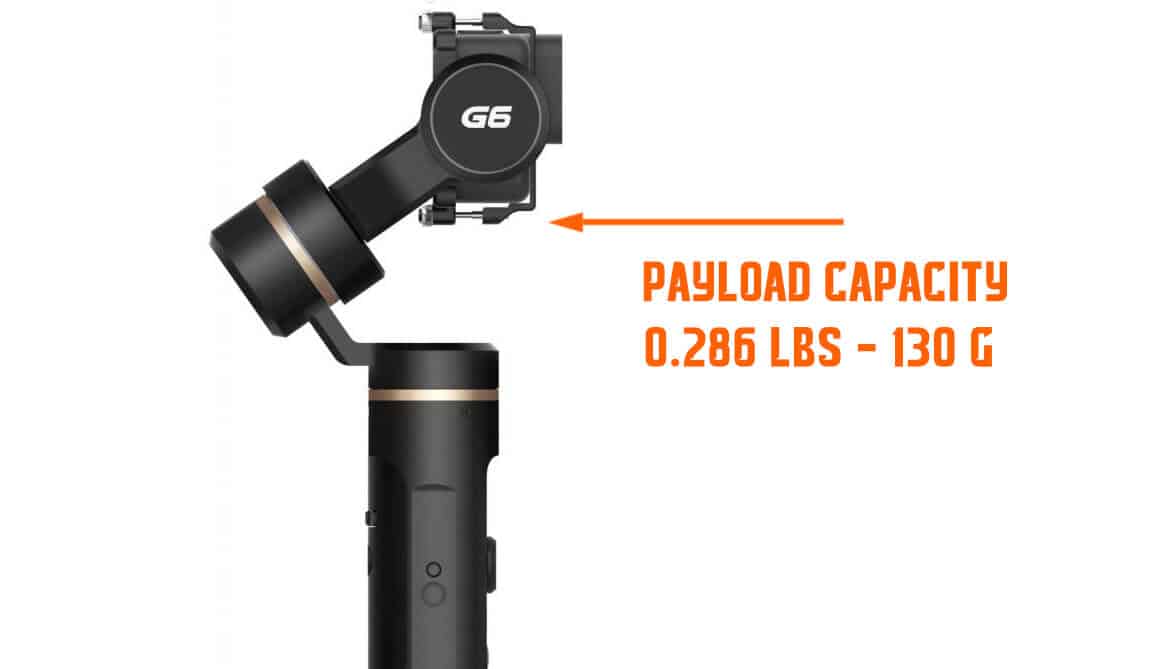 The stabilizer supports a large number of devices, including different versions of the GoPro Hero, Yi, AEE, and other cameras of similar dimensions.

It also comes with a separate holder for the Sony RX0. This is no small matter for RX0 owners, who have a somewhat limited choice of compatible gimbals.

There are also phone mounts available for this model. However, note that it has a payload capacity of up to 130g (0.286 lbs). This is enough for almost all action cameras on the market, but bigger and heavier phones are out of the question. 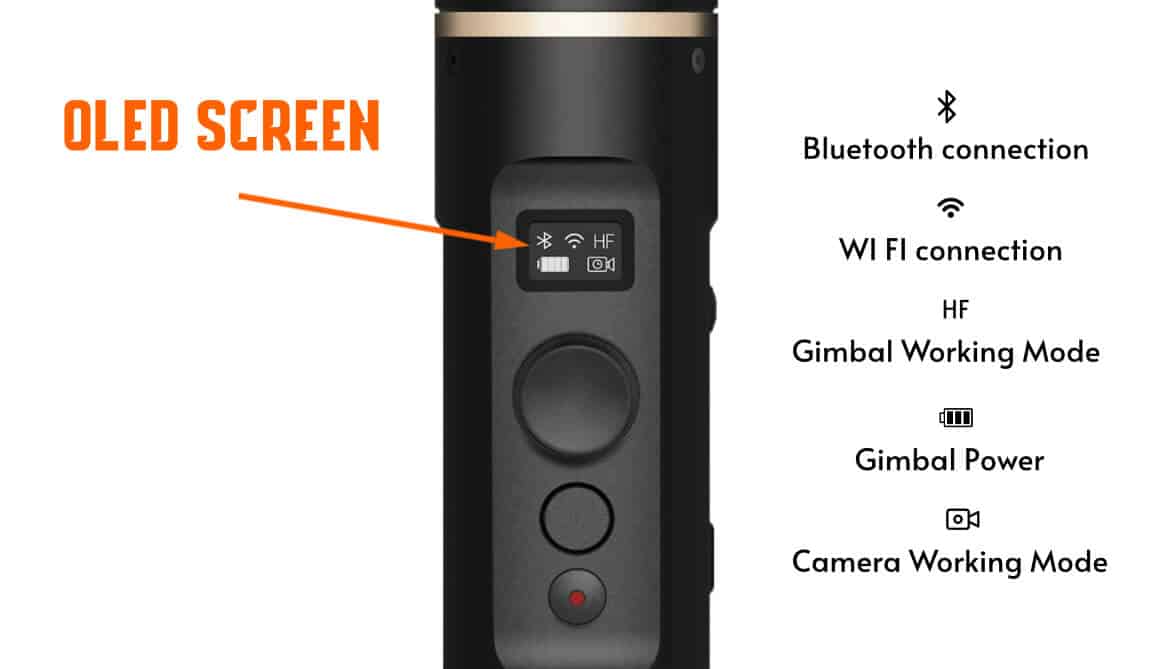 The G6 has inherited most of its features from its predecessor, but there are some interesting additions.

On the grip, there is a small OLED screen showing battery level, Bluetooth and Wi-Fi connection, camera mode, and gimbal mode. This is a nice touch: with most stabilizers, you have no way of checking which mode is activated at any given moment. This might get really annoying, especially if there is no dedicated button for each mode. The battery level indicator with four bars can also be very helpful.

There are two 1/4 mounting threads, one on the bottom and one on the side of the grip. This allows you to use multiple accessories and mount the gimbal on support equipment horizontally as well as vertically. I was also pleased to find an external mic port. Including one was definitely a smart move, as it seems to be in high demand these days.

The last innovation is a control slider on the back of the grip, which tilts the camera left to right. Personally, I didn’t find much use for this feature, but I have no doubt it will come in handy to some users.

The stabilizer has three shooting modes, just like the earlier model.

These are switched by tapping the mode button a certain number of times. You can also use it to activate selfie mode. Press it shortly three times in a row, and the camera will rotate to face you. It’s worth noting that this model doesn’t feature a separate selfie button, unlike the G5. 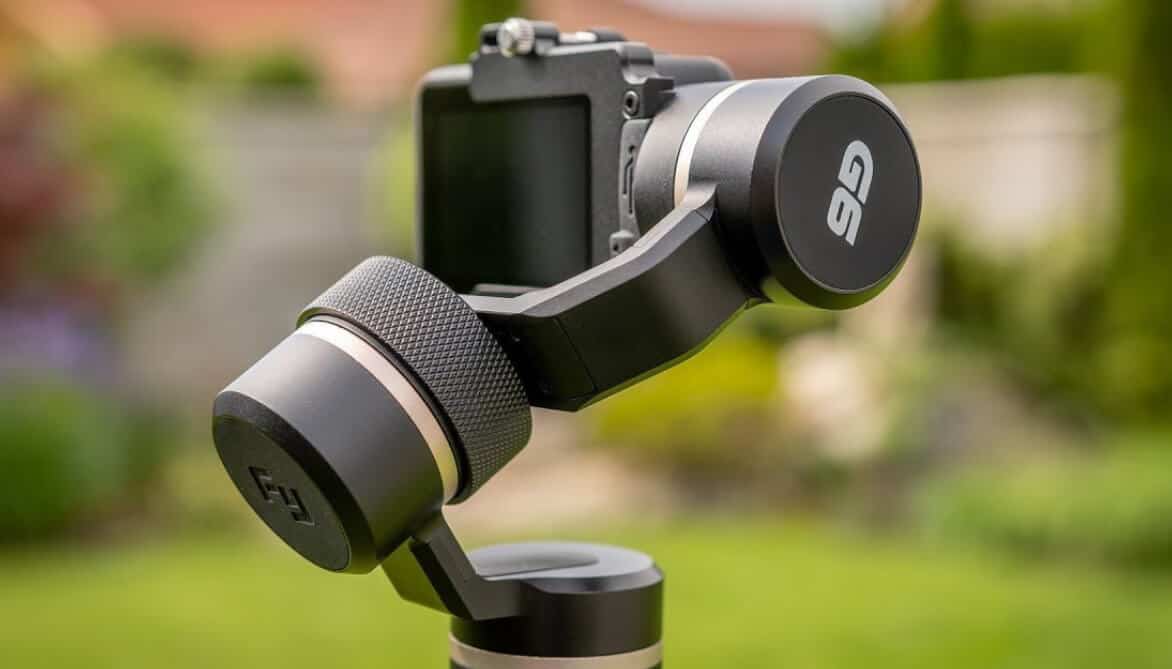 The manufacturer has noticeably improved upon stabilization quality. I encountered none of the issues that tarnished my experience with the G5. Overall, the gimbal does a very decent job, the footage looks smooth and professional. It still falls somewhat short of the more high-end Karma Grip, but the difference has become very subtle.

The motors seem to be faster and more efficient, compared with the G5. They are also very silent, so no weird mechanical noises will make it into your footage. If you want to reduce the noise even further, turn on the camera’s wind noise filter. This might come in handy when using a mic.

The new arm placement is another improvement. Whereas the G5’s arm could sometimes obscure your shots, there’s no such risk with the G6. It’s also important that the mount doesn’t block the camera screen, which happens with many gimbals. 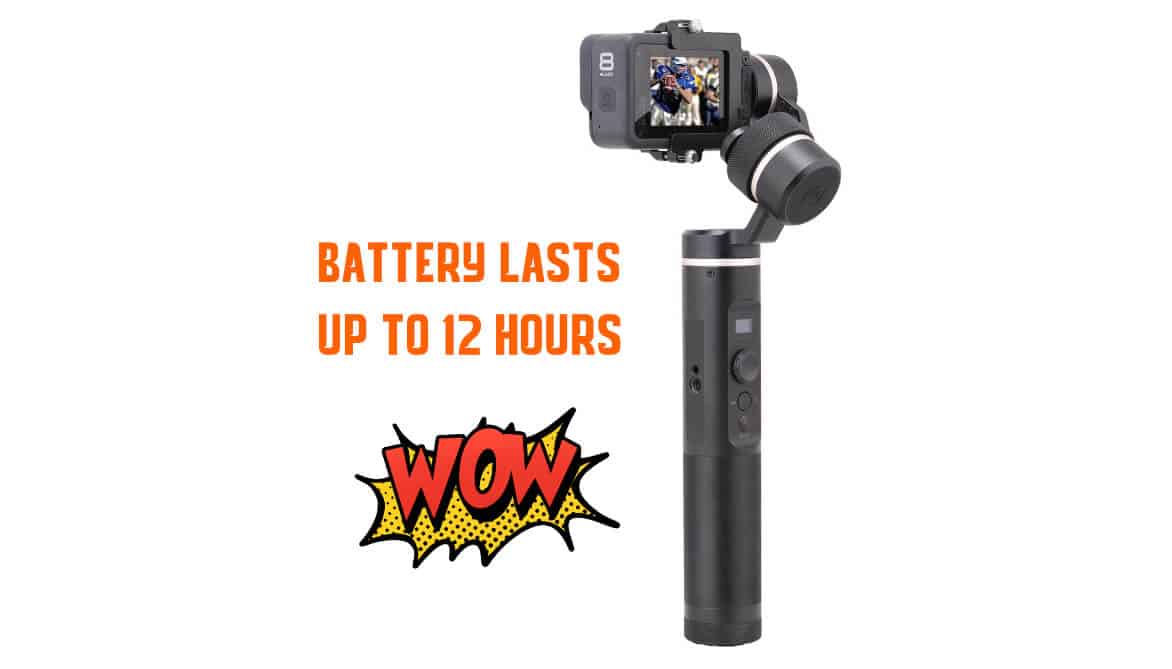 The G6 has a 5000mAh battery which can last up to 12 hours. This is very impressive, given its relatively small size. Plus, the battery is removable. If you buy a spare one, the charge level will stop being an issue altogether.

It’s also nice that the gimbal can double as a power bank. In other words, you can use it to charge your camera, even while shooting. Note that the package includes both a micro-USB and a type-C cable.

On the flip side, the battery takes 4 to 6 hours to recharge from zero, which is not very fast by modern standards.

In 2016, I tested the Feiyu G5, and it didn’t live up to my expectations. I found its quality lacking, especially for the price. The G6 is a great step up, despite being very similar to its predecessor on the outside. Its stabilization performance is not perfect, but very sound. While the acclaimed Karma Grip provides superior quality, it also comes at a price to match, let alone the fact that it’s only compatible with GoPros.

In my opinion, the Feiyu Tech G6 is one of the best GoPro gimbals within its price range of under $200. The only serious flaw is the mounting design, which does feel like a nuisance, especially in the field.