Feiyu Vimble 2 is the most recent handheld gimbal for smartphones produced by Feiyu. Recently, the company became known as a popular gimbal manufacturer that has established a reliable reputation in the market.

Their history is quite impressive and successful. First, they released a superior AK4000 for DSLRs. Later the novelty was followed by the best-selling G6 gimbal for action cameras. After this, the new gimbal Vimble C attracted public attention due to its good stabilization performance and cheap price.

Now we have got a chance to look at another device by Feiyu. The Vimble 2 is the newest manufacturer’s gimbal that is designed to be a better version of its budget-friendly predecessor. Let’s look at it in detail to evaluate if it is good enough to be one of the best gimbals for iPhone and Android. 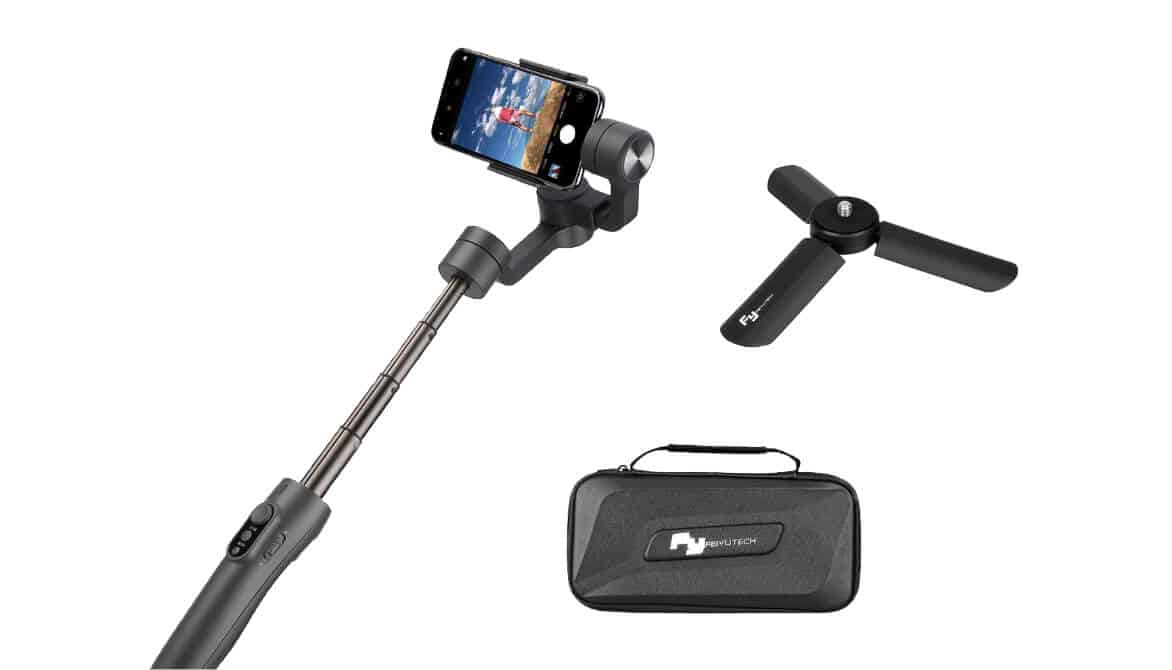 As soon as I opened the box, I noticed a nice travel-friendly semi-hard case that the Feiyu Vimble 2 came with. I considered it a nice bonus since even some of the more expensive stabilizers come in a cheap plastic package.

Together with the gimbal, you get a standard package of accessories: the USB cable to charge your device, a special strap to carry your gimbal, and a small tripod that is still useful. Its base size is too small to provide great functionality though, but it still can perform its job decently. It is not so important, as you always could use another tripod purchased separately with the Vimble 2.

Do not expect to receive anything special in terms of the build quality when purchasing a $99 stabilizer. The construction is plastic, which means that you cannot expect your gimbal to be super solid; yet, it can do well in most situations.

The Feiyu Vimble 2’s nice rubberized handgrip compensates for a rather cheap plastic construction. It is nice and comfortable to hold the device. Filming feels more natural due to this handgrip.

Compatibility With Smartphones And Other Devices

The stabilizer’s maximum payload is 210 g, it supports devices featuring a width between 57 and 84 mm. Those qualities make the Feiyu Vimble 2 compatible with all iPhones and almost all Android devices. It supports even bigger tablet-sized devices, such as Samsung Galaxy Note 9, which weighs 201 g. Therefore, I personally cannot think of any smartphone that this gimbal does not support.

While the Vimble 2 is mainly marketed as a smartphone gimbal, it is also compatible with the GoPros and some of the action cameras. Nevertheless, using it with those devices might reduce access to certain functions of this gimbal. Also, its plastic construction does not leave much space for action. 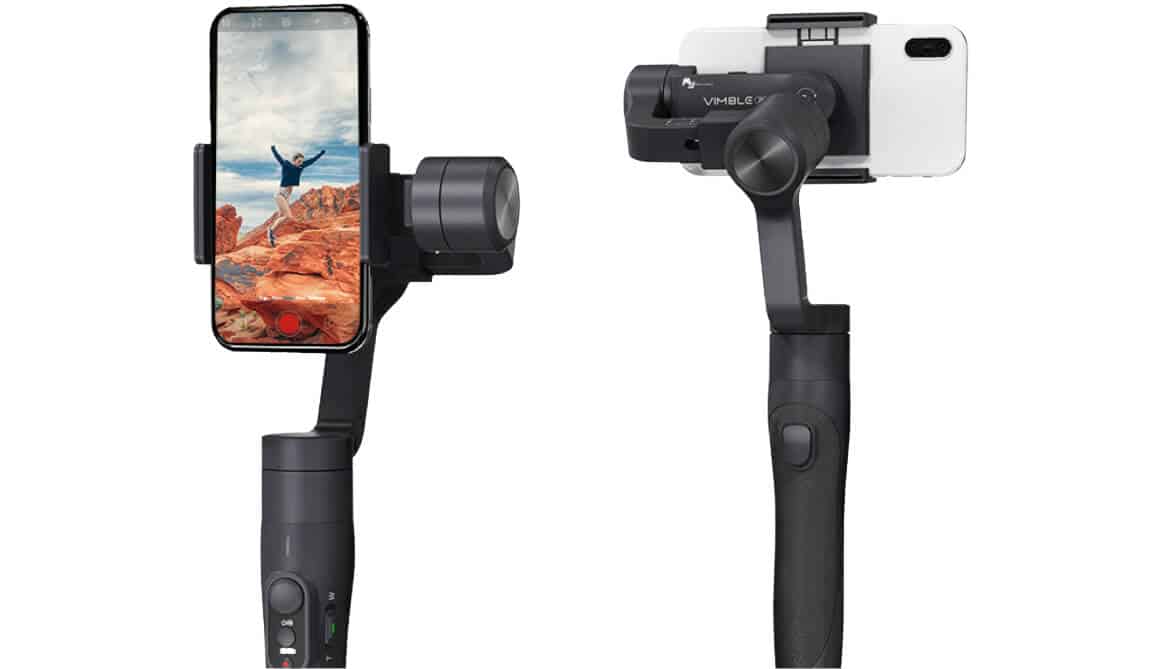 What makes this device special is its 18 cm long extension pole. This feature is obviously good for those users, who like taking selfie shots. However, I also think that thanks to this pole, you can easily make low-angle shots with the camera placed close to the ground. It is definitely handier to use the extension pole instead of bending your whole body to receive a few nice shots.

It is also easy to attach your smartphone to the Vimble 2. I found mounting my phone to this cheap gimbal even more convenient than doing this with my favorite stabilizers, the EVO GP-Pro or Zhiyun Smooth 4.

The Vimble 2 allows you to change the vertical mode to horizontal by using your hands, so you do not have to use any electronic controls. This feature was missing in the Vimble C, so I found it particularly convenient.

The micro USB charging connector available on the Vimble 2 allows you to charge your phone while shooting. However, keep in mind that the device’s average battery life is about 5 hours. So you cannot really depend on the gimbal if your phone’s battery is dying. Nevertheless, it is still nice to have this opportunity if an emergency hits you. 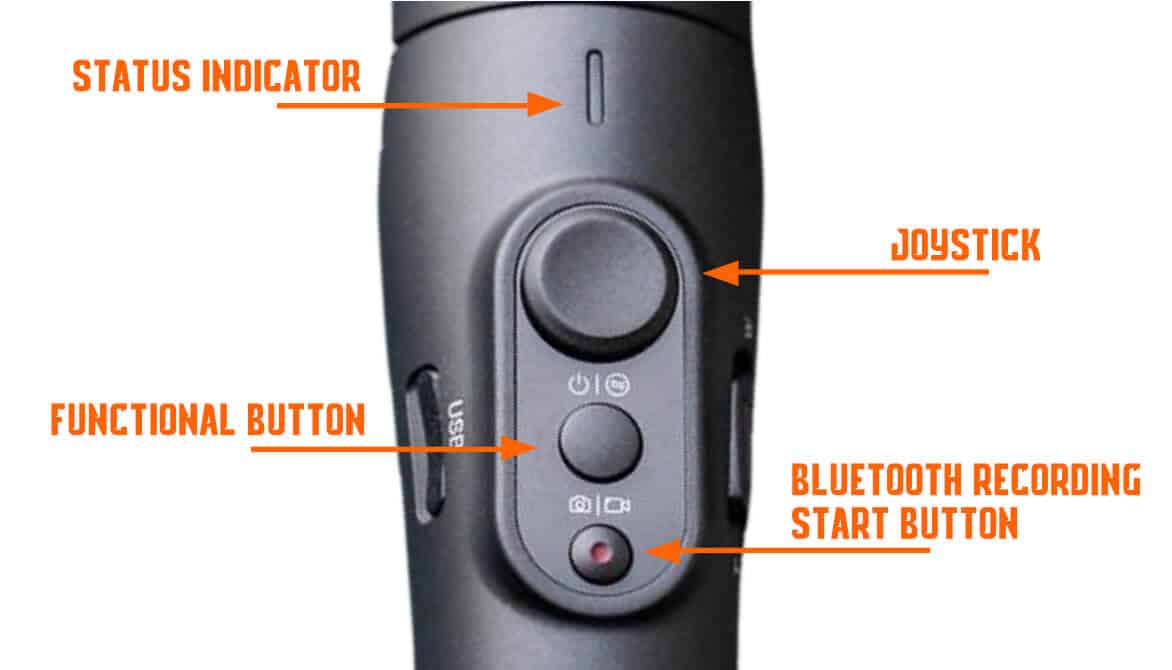 Controlling the Vimble 2 is so simple that it can be performed intuitively. You do not need to acquire any special knowledge to control this gimbal. In my previous smartphone gimbal reviews, I have analyzed a few devices, whose control system was as complicated as the one of the airplane.

The Vimble 2 is different. In fact, the gimbal allows you to control it using only one button. Activating all three axes is possible by pressing a designated button one, two, or three times. The gimbal stabilizer also has a trigger that can lock the device when necessary.

The joystick, which became a common control tool available in most handheld gimbal stabilizers, is featured here too. You can use it to change the gimbal’s direction or pan manually.

Stabilization performance is the most important feature that any gimbal might have. Of course, any of the Vimble 2’s qualities would not matter if the gimbal could not stabilize a video properly.

The Vicool application is a special software released by Feiyu to help control the Vimble 2 gimbal. With the help of this app, you can adjust certain settings on your gimbals, such as motor strength or panning speed.

I do not like using new software released by companies and prefer to use third-party applications to control my gimbal. Yet, there are certain functions that come available only when using the Vicool app specifically.

For example, there is an advanced zoom feature that allows you to control zooming settings by using the camera joystick. However, I noticed that the function was not ideal. On all phones, when using this feature, the footage had ripples when zoomed in. It was not so evident on iPhone 7, but on the rest of the phones, it did not turn out great.

The biggest problem with the app is that it does not support shooting 4K videos. Its maximum quality is only 1080P. I find it to be a huge problem, as most phones now allow shooting high-resolution videos without any special additional equipment.

You might have questions about how these shooting modes work? Here

Generally, the Vimble 2 is a good gimbal, featuring decent stabilization quality, a useful extension pole, and great compatibility with many devices. Yet, the Feiyu Vimble 2 is not perfect due to its rather weak battery and poor app.

Don’t think that the Feiyu Vimble 2 is a good gimbal for you?

Check out my selection of the best handheld gimbals for iPhone and Android for better options to choose from.