Hohem iSteady Pro is one of the recently released GoPro gimbals that promises to be quite an impressive device. It is very affordable, yet, the manufacturer promises superior quality. In this review, I am going to examine the new gimbal and see it is as good as it seems.

A lot of decent GoPro gimbals have been recently presented in the market for video professionals. Surprisingly, more devices are becoming affordable for a wider segment of the audience.

The gimbals that were previously considered to be top devices available only for advanced users, for example, 3-axis devices, are now presented in the market for relatively cheap prices. This gives an opportunity to most fans of video production to enjoy the new devices and provide superior quality movies with their Go Pros.

One of those budget-friendly gimbals, the Hohem iSteady Pro, has entered the market recently. Not much is known about this device yet, so let’s find out if it is really worth your spendings.

As soon as you open the box with this device, you can tell that it is much cheaper than the regular top-notch gimbals. The box is not heavy; when you open it, you can see quite a nice case. However, not many accessories go together with this device.

Inside the case, you only can find the gimbal itself; it goes together with a very small USB cable and quite a short tripod. The whole package is significantly smaller and lighter than an average gimbal box that you would normally see.

When I first took the gimbal, I could tell straight away that it was a cheap analog of the superior devices. It is not heavy and feels more plastic. I realize that many top-notch gimbals have the same plastic construction. However, they manage to do it in a more stylish way combining it with stainless steel, for example. This gimbal looked cheap and it felt this way, too.

However, it is important to realize that a gimbal of this price category could not have the same build quality as other more expensive GoPro gimbals. For this price, iSteady Pro is a decent device, that is worth looking at. 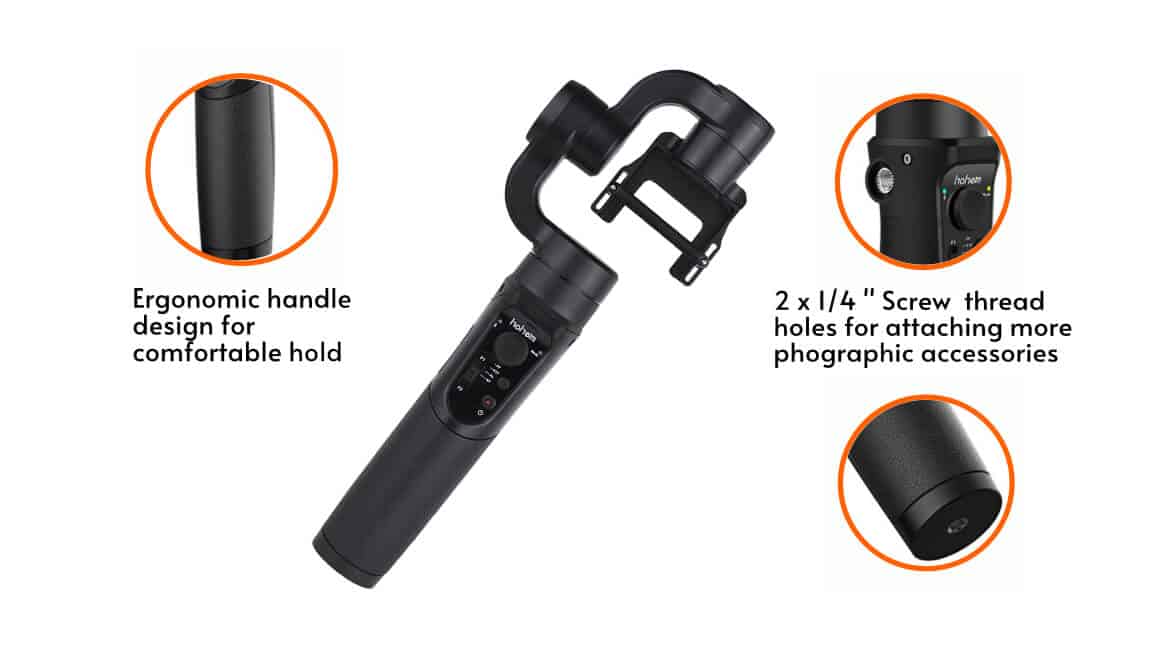 Another thing that I found a little annoying was the GoPro attachment clip. The superior gimbals leave an opportunity of detaching this clip from the device. Unfortunately, iSteady’s attachment clip cannot be removed, as it is fixed. This gives you no chance to use this gimbal with your smartphone camera.

The gimbal has an option of attaching extra devices, though. For this purpose, it uses quarter-inch screw thread holes for additional devices or accessories. The tripod that comes with the device can also be attached using these thread holes. There are two of them on the gimbal. The first can be found on the handgrip’s side; the second is located at the gimbal’s base.

iSteady Pro features three USB ports. The regular one can turn the gimbal into a power bank, allowing you to charge any devices from your gimbal battery. The second port is smaller and is used for charging the gimbal itself. And then there is the third port that is used to connect any mounted devices that you might have. This port is located on the head of the gimbal, which I found very inconvenient for connecting my GoPro HERO7 and HERO5.

It makes sense that a GoPro gimbal is compatible with the majority of the GoPro models available in the market. You can connect this gimbal to GoPro 3, GoPro 4, GoPro 5, GoPro 6, GoPro 7. The good thing is that you also can use it with other devices whose size is similar to the GoPro dimensions.

The gimbal has different techniques of attaching the devices to it, depending on the model. If you have GoPro 5 and newer, you can attach it with the lens beside the motor. You will have to do it the other way around with the GoPro older models. 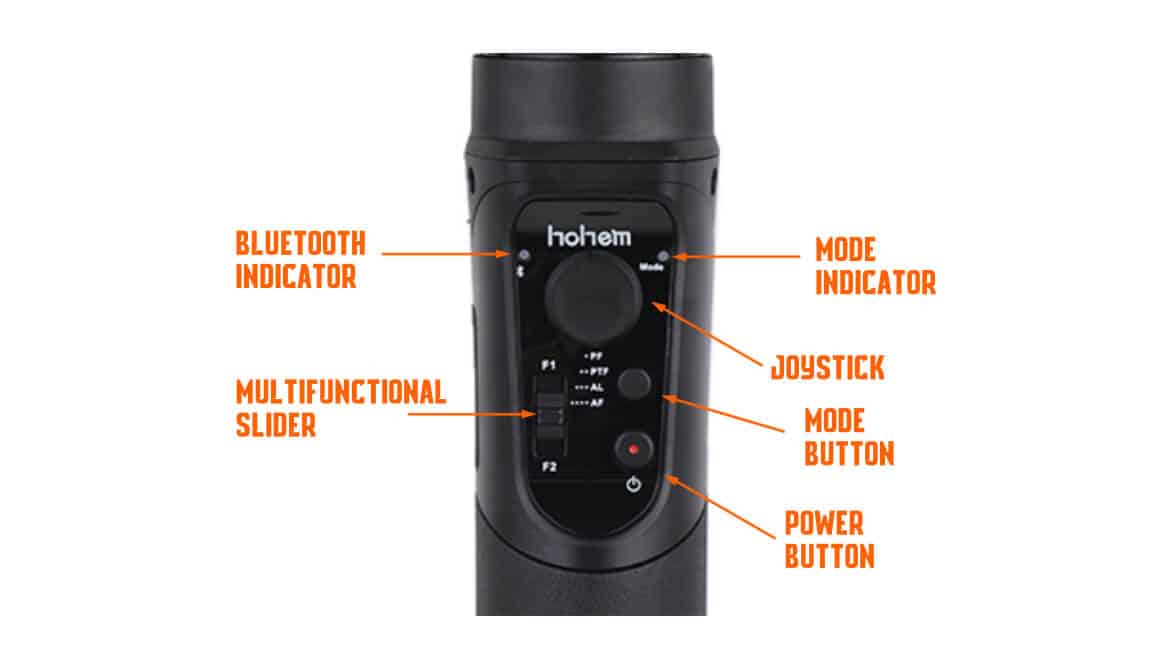 For a cheap gimbal, iSteady Pro provides users with a lot of opportunities to control the device. The lights on the gimbal will inform you about the shooting mode that you are using. You can also follow the LED indicators to find out if the device is paired with your smartphone via Bluetooth.

The number of control buttons placed on the gimbal grip is also impressive. Of course, there are regular off and on buttons, as well as the button used for changing the filming mode. I believe they are self-explanatory and there is no need to elaborate on this. There are also buttons that allow users to turn the quick lock on as well as to assign a custom mapping via the app.

Besides that, there is a joystick that enables users to easily control the camera movements, pan, and tilt them if it is necessary. What is good about iSteady is that it features a 360° range of motion in the pan axis. That is a feature that makes this gimbal stand out among many others that only have a 90° range.

For a budget-friendly gimbal, the iSteady Pro features quite a good range of shooting modes. There are four on them in total. This gimbal has a special LED indicator, which helps you easily understand what mode you are using at the present moment.

The pan-following is an automatic mode that the gimbal is using by default. This regime allows you to follow movements in the horizontal axis, at the same time keeping the horizon steady. Since iSteady is a 3-axis gimbal, it also controls the roll axis, which allows reaching a better quality of stabilization.

There are more modes available in this gimbal. The next regime is the pan and tilt-following mode. It helps the camera concentrate on the objects smoothly moving in both horizontal and vertical axes.

Then, there is the locked mode. This means that the gimbal will do its best to keep the picture steady, even when there are objects moving in all three axes. You should use this regime when interviewing a person – the main object is steady, but there are other things that you do not need to focus on.

Last, but not least, there is the following mode. This mode is the complete opposite of the previous regime, it gives you complete freedom. The camera can follow all actions in three axes, but make them smoother. I personally do not think that there are many situations when you can use this mode. But it is still nice to have an extra option, anyways.

The Hohem company has developed an application that you could install on your iPhone or Android devices. This way, you can easily connect your gimbal with your smartphone. There are quite a few things that you could do thanks to this integration.

Namely, on your app, you can work with gimbal calibration. You can also easily control your device – change the shooting modes, zoom in and out, pan left and right. The configure settings are also available both in Android and iOS apps. The mobile application also lets you get acquainted with the gimbal user manually and learn more about its functions.

What I liked about this app the most is that you can save all your settings there under different profiles. This way, you do not have to set up your gimbal manually every time you use it.

Overall, I think that Hohem has developed a really great app with a lot of features. Of course, it has its small disadvantages and it is not perfect. However, it is definitely one of the best gimbal apps available out there.

The Hohem iSteady Pro provides a superior stabilization performance, which surprised me, given my somewhat low expectations. I was happy to realize that in fact, the stabilization of this gimbal was very similar to one of my favorite Feiyu G5 that costs twice as much as the iSteady.

I have tested the gimbal both with my GoPro HERO3+ and GoPro HERO6. They both did a great job; HERO 6 provided slightly better results, though, due to its built-in settings.

Another good thing about iSteady Pro is that its motors are very quiet. This is due to the smaller size of the gimbal and, therefore, its motors.

The Hohem iSteady Pro is a great budget-friendly gimbal that has all same features as other more expensive devices have.  Under $100 you get an impressive device featuring a great stabilization performance, many shooting modes, and a rich control panel. Moreover, their app is very functional and user-friendly. This is so far the best gimbal in this price category.

The only thing that might be disappointing about this gimbal is its poor build quality. While I personally do not think that is a huge problem, given other amazing qualities of this device, I would recommend you use this gimbal carefully while working on some adventurous shoots.

Check out my category on the best gimbals for GoPro and choose wisely.