Looking for an affordable gimbal for everyday use?

The Hohem iSteady X is conquering the market quite successfully.

This manufacturer might not be as influential as DJI or Zhiyun, but Hohem smartphone gimbals still rank high among Amazon best sellers.

The Hohem iSteady Mobile was already an exemplary budget gimbal, but the new model seems to have gone the extra mile. It’s even lighter, cheaper, and foldable, on top of that.

With gimbal technology reaching its maximum potential, manufacturers now vie to make everything as small as possible. Hohem is hardly a trendsetter in this regard. DJI’s Osmo Mobile 3 was the first foldable gimbal, and Zhiyun’s Smooth Q2 is the smallest on the market. However, with the iSteady X being available for just $69, Hohem is offering the best price-quality ratio, at least officially. In this review, we’ll discuss if the iSteady X is the new go-to. 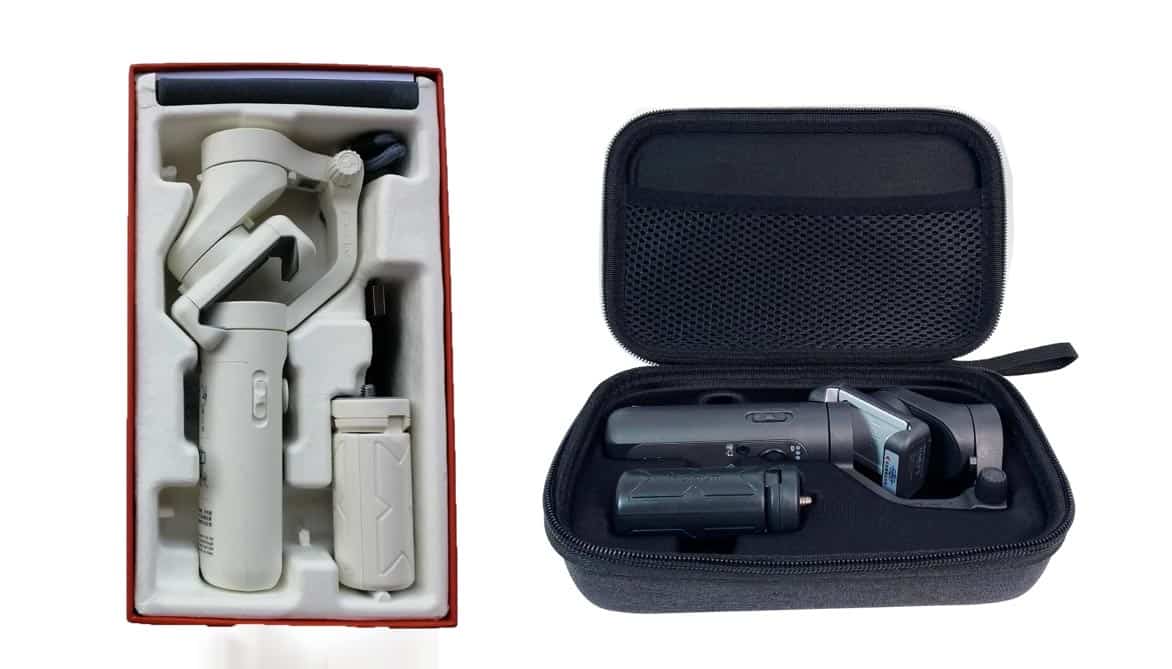 The iSteady X is claimed to be the lightest gimbal in the world. At a glance, there’s no reason to doubt that: the gadget does feel really light. It’s also conveniently small. Folded, it can easily fit in your pocket.

The body is entirely made of plastic. It certainly reduces the weight but does so at the expense of the build quality. Many fancier models are made of aluminum alloy with rubberized grips. The iSteady X is much more modest, although the metallic control panel looks quite stylish.

The phone clamp is rubberized, so your smartphone won’t get scratched. Its claws are tapered inward to push the phone to the back of the clamp. As a result, it’s always mounted safely, with no risk of slipping or falling. The most unusual thing about this clamp is its depth. It can easily fit even thick phones incompatible with most gimbals I’ve tried. This also means you probably won’t have to remove a thick phone case if you use one.

The handle is a plain cylinder, rather short and with no curves for better grip. This makes the stabilizer somewhat uncomfortable to hold. Personally, I’ve used it with a tripod most of the time. Fortunately, it’s included in the package at no extra cost. The gimbal sits securely on the stand due to the standard tripod mount at the base.

Another thing that caught my eye is the absence of a type-A port. Unlike many other gimbals, this model is only equipped with a USB-C charging port, so you can’t use it as a power bank. 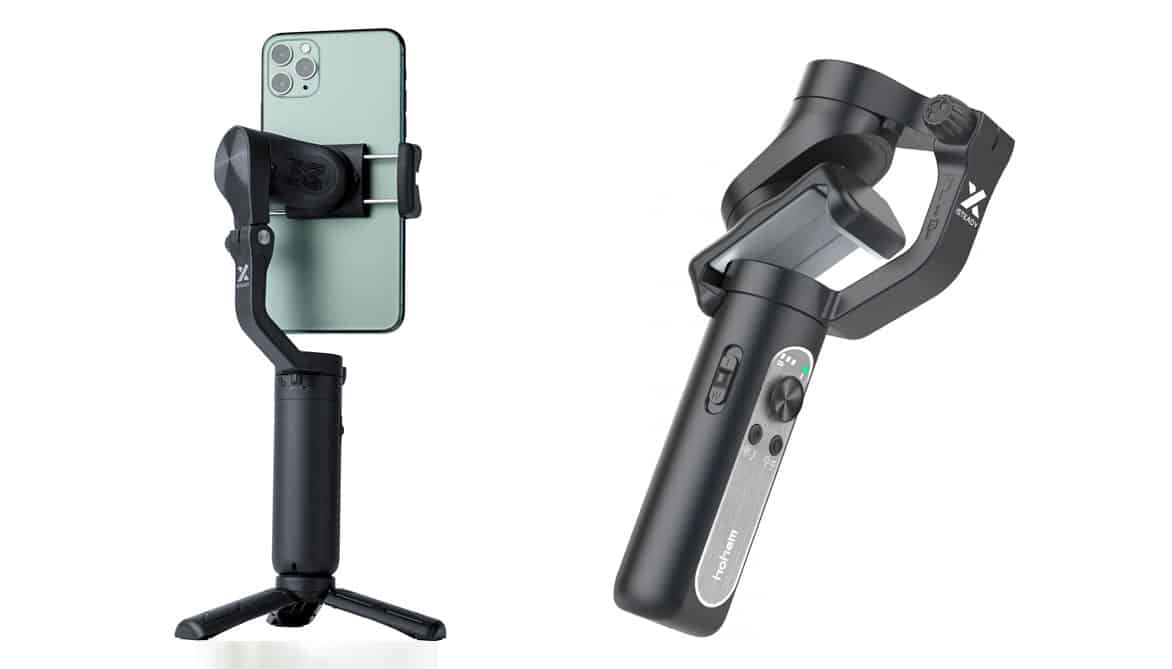 The iSteady X has an offset arm, which is a typical solution for gimbals with a foldable design. In this particular case, it serves yet another purpose, ensuring that the pivots don’t occlude the shot.

This is how many gimbals tend to ruin the footage in combination with some smartphones. I tested the Hohem iSteady X with three different phones and was pleased to not encounter this problem.

A small shortcoming of this construction is a decreased range of motion in the Y-axis. The existing range is quite enough for most users: you probably won’t feel this limit at all. However, it’s worth mentioning that it’s even less noticeable in the traditional design.

The 18650 li-ion 2000mAh/3.7v battery lasts for 8 hours and takes about 2 hours to fully charge from zero, which is quite fast. The battery is built-in, so you can’t replace it with a spare one. It’s inferior to the likes of DJI OM4 or Zhiyun Smooth Q2, but still good enough for the majority of people. The charge level is indicated by the lights on the front.

The maximum weight load is 0.61lbs or 9.88 ounces, so the gimbal can easily accommodate even the heaviest phones, such as iPhone 11 Pro Max or Samsung Galaxy Note 20 Ultra.

I’m quite sure at the moment there are no phones that exceed the acceptable weight limit. However, if your phone is on the heavy side, the battery runtime tends to be shorter because of the additional exertion on the motors.

To start using the gimbal, it’s necessary to install the Hohem Pro app. It’s available for Android from 6.0 up and iOS from 9.0 up. For a quick download, just use the QR code on the box. 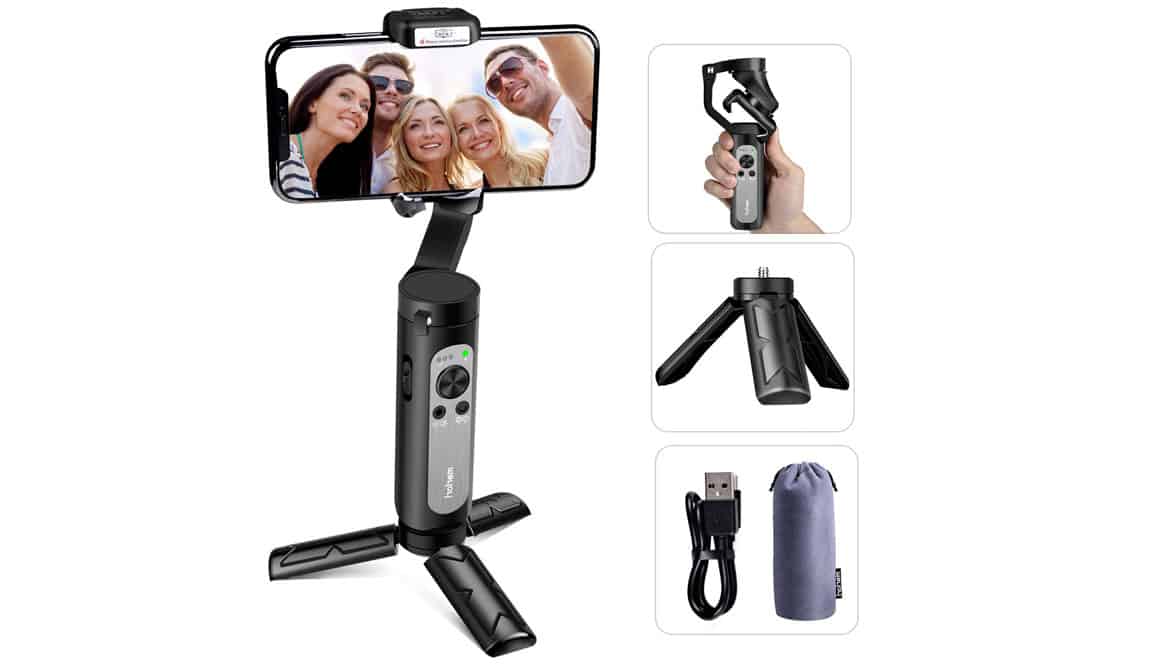 The gimbal is rather easy to set up. First, place your phone into the clamp, then turn on the gimbal and register your account. Connect the devices via Bluetooth, using the Hohem app.

Having to register in order to get started might be a bit frustrating. On the positive side, you’ll only have to do it once. After that, the gimbal can be combined with any phone with no further formalities.

The last step is to launch the auto-calibration process in the app. Before you do this, it’s a good idea to attach the stabilizer to the tripod and place it on a flat surface for proper balance. Auto-calibration takes about half a minute. Once the LED lights on the front stop flashing, the device is ready to use.

The iSteady X control system consists of two buttons, a joystick, and a zoom slider.

Both buttons are multi-functional, which might come across as inconvenient if you are not used to them. This seems to be the new industry standard, though. Gimbals with dedicated buttons are inexplicably becoming rare. 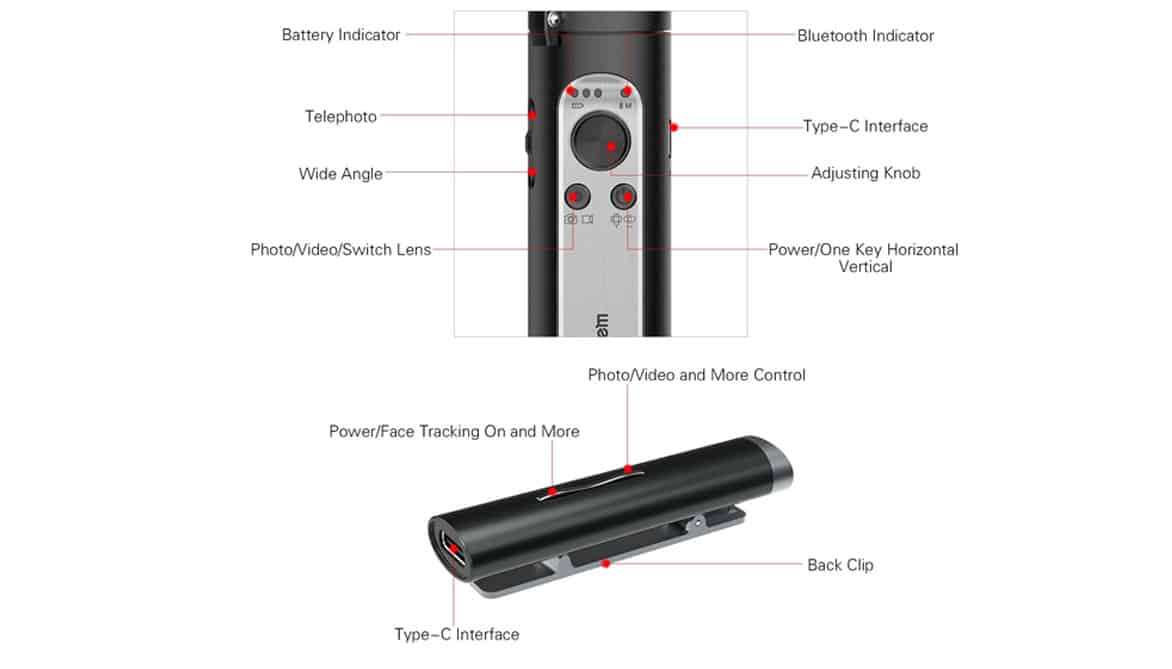 To turn the gimbal on and off, hold the power button (on the right). If you want to switch camera orientation (from portrait to landscape and vice versa), press it shortly. To re-center, the camera (position it perpendicularly straight above the control buttons), press the same button twice shortly.

The record button (on the left) doesn’t function the way you might expect. Strangely enough, pressing it once results in taking a picture. To start or stop filming, you have to press it twice. This button also switches between the front and back camera, if you press it three times.

The joystick and the zoom slider are easy to reach with a thumb. Zooming in and out only works when you use the Hohem app. The smoothness greatly depends on the phone. My tests showed it to work perfectly with an iPhone 10 and 11. However, with a Samsung S10 or Xiaomi Note 9 there’s room for improvement.

The joystick can be used for repositioning the phone, although just moving your hand is preferable in most cases.

Unlike the Hohem iSteady Mobile Plus, this model doesn’t have a rear trigger on the grip. That button used to activate the Sport Mode and boost the responsiveness of the gimbal motors, enabling it to follow rapid movements smoothly. Personally, I found myself wishing I still had this feature at my fingertips.

One of the gimbal’s functions is to ensure that the camera doesn’t follow the operator’s unintended movements. You can choose to lock a particular axis to prevent the camera from moving along it. The iSteady X has four working modes suiting different purposes: 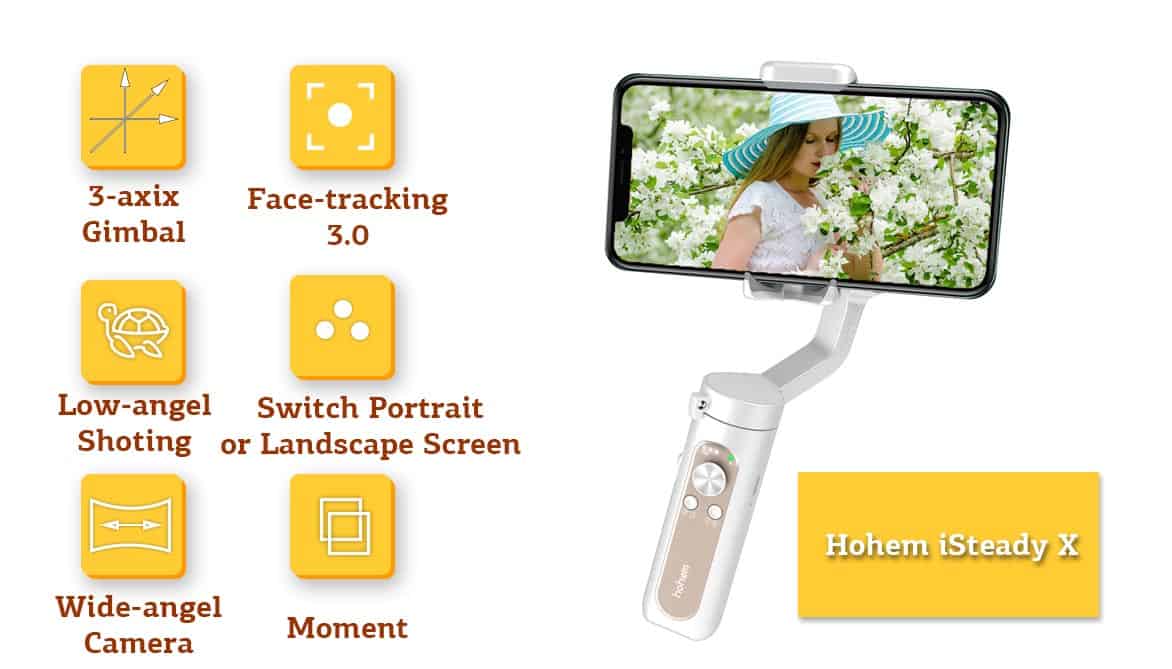 The iSteady X is much smaller than an average phone gimbal.

When handheld phone gimbals were still a novelty, I used to spend a lot of time testing their stabilization performance. Recently, the differences have become virtually non-existent, and such a thorough analysis seems to be excessive.

Long story short, this gimbal stabilizes video just as well as more expensive models. Making use of the iSteady 3.0 algorithm, it smoothes out most of the jitter caused by unsteady hands and walking, even at a brisk pace.

The motors work noiselessly, which is no small matter. Older gimbals are known to make mechanical noises that get recorded along with your videos. In this case, it won’t be an issue.

However, I noticed that the power button doesn’t always work properly. Sometimes pressing it twice fails to re-center the gimbal.

The only way to fix this was to restart the gadget, which got rather annoying. I’m not sure what caused the issue, but it seemed to occur after I used the joystick for panning and tilting electronically.

The Hohem iSteady X will work fine with your normal camera app. However, to unlock all of the existing possibilities, you’ll have to use it with the manufacturer’s app.

Apart from enabling the zoom slider, it allows you to use a number of unique cinematic templates activated with one tap. Most of them are available in the app’s Moment Mode: 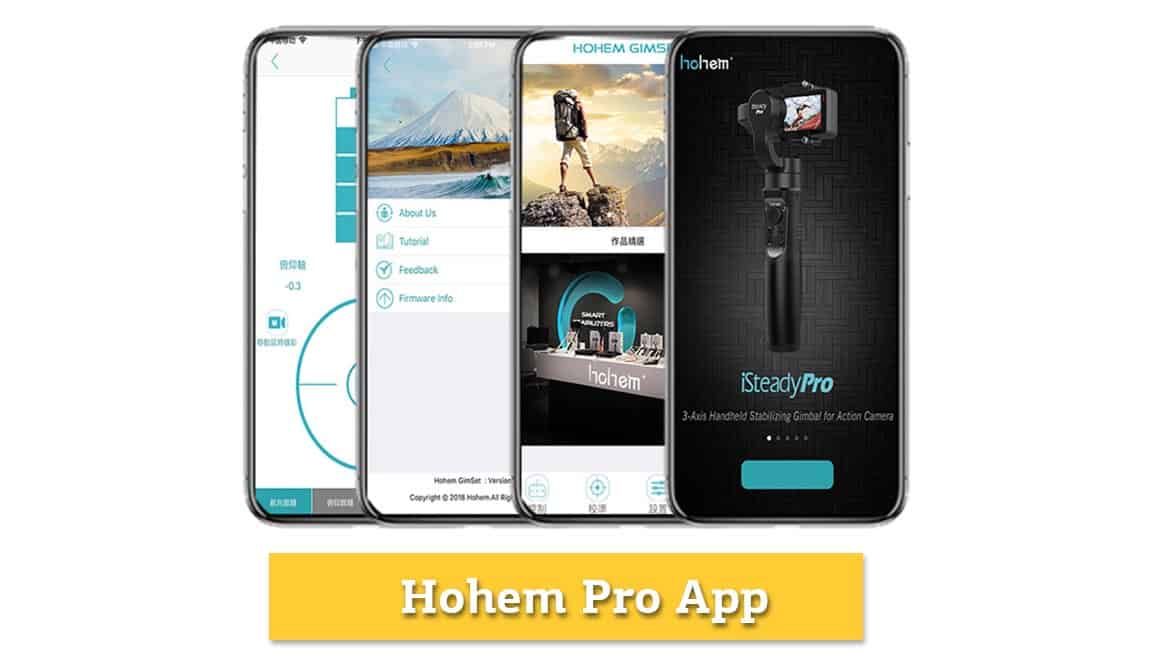 The most essential features are the face and object tracking modes.

Face tracking is powered by AI which automatically recognizes faces. It will turn the camera to keep your face in the frame. This is especially important for vloggers who need to move around freely while recording (for example, cooking or dancing).

In the object tracking mode, the gimbal works the same way, but instead of faces, the camera will follow any object of your choice. All you have to do is to draw a square around it on the screen. It appears that this mode wasn’t available in some older versions of the app, so it wasn’t tested by the earliest reviewers.

There are also different filters for color grading and music to add to the footage. If you don’t want to add music, tap the musical note to disable this feature.

Finally, the app provides a user guide for the device. This might come in handy if you don’t have a lot of experience with gimbals.

In sum, the Hohem Pro app isn’t as polished and well-designed as the DJI Mimo app, but it’s certainly not the worst among gimbal apps. All in all, it keeps pace with the rest.

Hohem scored its first success with the iSteady Mobile. Later it introduced the iSteady Mobile Plus, a slightly improved version of the initial product. It’s practically the same in terms of design but has a rear trigger and extended battery life.

The price difference between this device and the iSteady X is insignificant. If you are looking for a budget gimbal, the choice between the two might not be that obvious.

If you ask me, the iSteady X is a better option at the moment. The earlier model might be more ergonomic and it does have dedicated buttons. However, it feels much bulkier and a bit out of date. 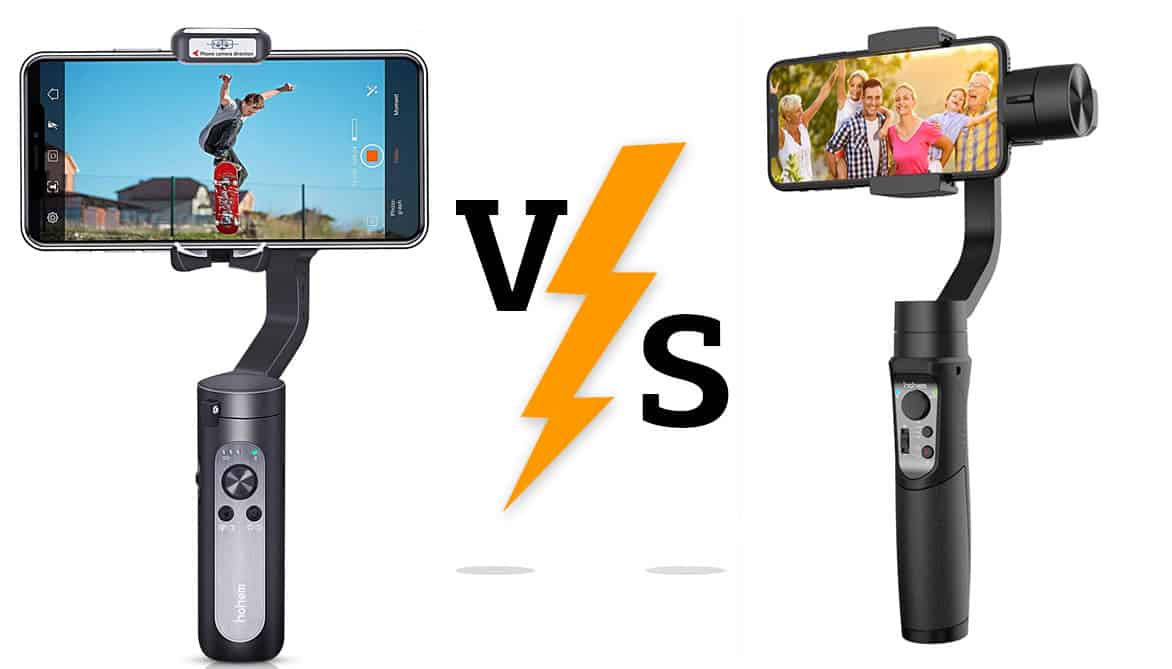 The Hohem iSteady X is a phone gimbal of very sound quality. In fact, it’s hard to find anything better in the same price range. Hohem has clearly taken cues from the recent novelties in the gimbals world and combined all the trends into a much cheaper package.

The videos are perfectly smooth and the app offers filming modes for all occasions. This gimbal does its job, and you won’t find it lacking if you’re a novice videographer or just a casual user tired of shaky videos.

Foldable design and lightness make it perfect for travelers. This is a gadget you can always keep in your bag or even in your pocket just in case. Surely, more expensive gadgets like Zhiyun Smooth 4 are more feature-packed, but they are also far less practical for everyday use.

However, I would advise professional users to consider other options. The iSteady X has no rear trigger for activating the sports mode and it’s compact at the expense of ergonomics. In addition, the control system isn’t particularly well-designed, and you’ll have to use the app to perform some frequently occurring actions.

If you are still looking for the Best handheld gimbals for your iPhone or Android device, I recommend you to check out this page with the selection of the most impressive stabilization devices.