Today I am going to compare the two popular gimbals which have been recently competing with each other – the Ronin-S and Weebill LAB. As always, I will look at their stabilization performance, build quality, size and compactness, compatibility, and a few other important factors. This article is an attempt to understand which device one should choose over another and which gimbal is worth purchasing.

The Zhiyun was a leader in the market for relatively cheap one-grid gimbals for quite a long time.

This domination lasted until DJI has finally released the much-awaited Ronin-S. If you read my review on this device, you probably know that I think it is more impressive than the extremely popular Zhiyun Crane 2 or Zhiyun Crane 3. Recently, Zhiyun has released two new devices. The Crane 3 LAB and Weebill LAB are seen as Zhiyun’s tools to return its dominance in the single-handed DSLR/Mirrorless camera market.

I called the DJI device the best gimbal for DSLR in my last review. This makes it even more interesting to look at the two new models introduced by Zhiyun. Will they manage to get their crown back? While the Crane 3 is absolutely worth looking at, I still believe that Weebill LAB will become a more popular device. Its affordability and compactness, along with its small dimensions, will definitely make it one of the best sellers. Therefore, in this article, I am comparing the Ronin-S to this device, produced by Zhiyun. 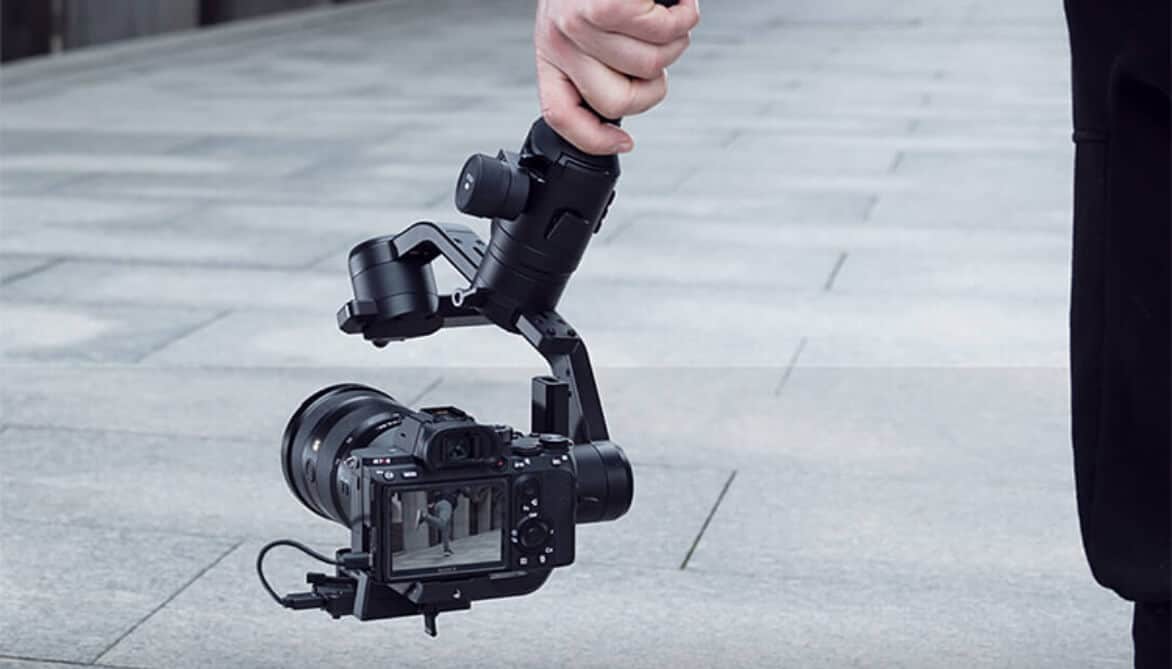 The majority of gimbals, which  Zhiyun or DJI produced, provide a highly impressive quality of video stabilization. It is not a surprise that the Ronin-S or Weebill LAB are not exceptions. After analyzing both devices, my verdict is that the DJI device’s stabilization performance is slightly better. However, I would not determine this difference great enough for making any decisions on the gimbal purchase choice.

The size and, of course, the weight of a gimbal is an important factor when choosing a device for professional use. Heavy devices might be more problematic to shoot with, as they exhaust cameramen and do not give enough space for making creative shots.

The Weebill LAB’s weight is 1.12 kg, while the Ronin-S is slightly heavier weighing 1.86 kg. The smaller weight is not the only advantage of the Zhiyun device. It is also much more portable and easy to carry around. Filming with Ronin-S for a long time might be tiring and it also feels clumsy sometimes. Thus, the Zhiyun device definitely wins this competition. 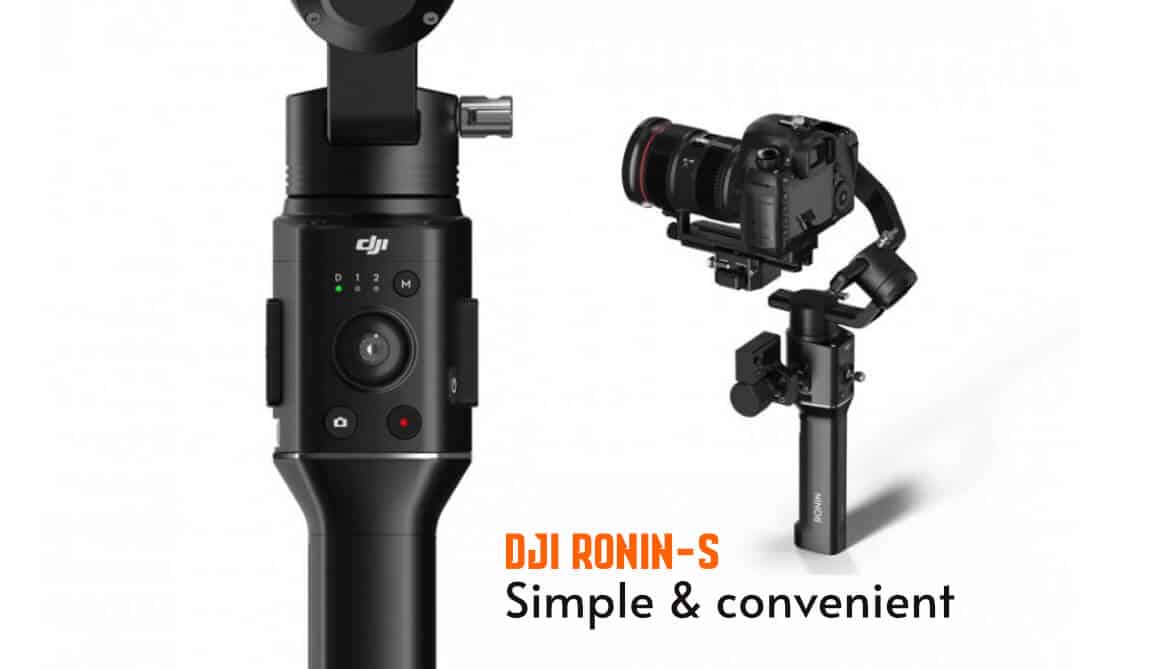 The Weebill LAB’s functional design has two sides. On the one hand, the gimbal is light and easy to carry around. On the other hand, its short grip has no space left for a convenient button layout. All buttons are located so close to each other that sometimes it gets quite problematic to control the device.

A definite advantage of the Zhiyun device’s ergonomics is an opportunity to attach a separate tripod to two different points of the gimbal. This allows you to hold the gimbal in different ways, and also use both hands while filming. This can extend your creativity and also help you shoot for a longer time.

There is not much left to say about DJI Ronin-S’ functional design. It is simple but very convenient at the same time. It has a bigger grip with a great button layout. However, I found that the focus wheel was placed in a slightly clumsy manner, which is not a big deal, anyways. 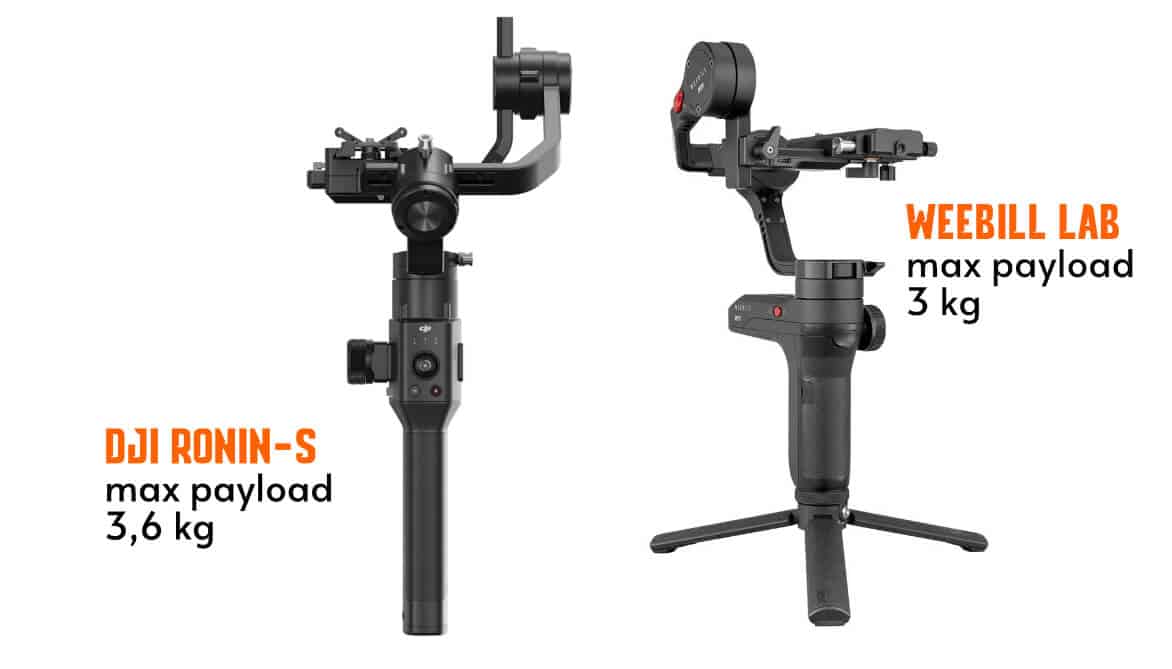 The Zhiyun gimbal is compatible with devices with a maximum payload of 3 kg. DJI Ronin-S did a better job with this – it can support the cameras with a weight of up to 3.6 kg. While the difference might not seem big, it is very significant for professional filmmakers, who need to use different devices in their everyday routine.

If you intend to use heavier cameras with bigger lenses, you will need to choose the bigger device, since it features higher compatibility with DSLRs. In fact, Zhiyun originally designed their Weebill LAB for working with mirrorless cameras, and it is great for them.

Although the smaller device reviewed today is marketed as a device suitable for work with the DSLRs, in fact, it is not. Its smaller motors and the short grip are simply not designed for working with bigger and heavier cameras. Even mirrorless cameras connected to lenses seem to be too heavy and big for this gimbal. Thus, you can imagine that using the Zhiyun device with the DSLRs is not a good option. 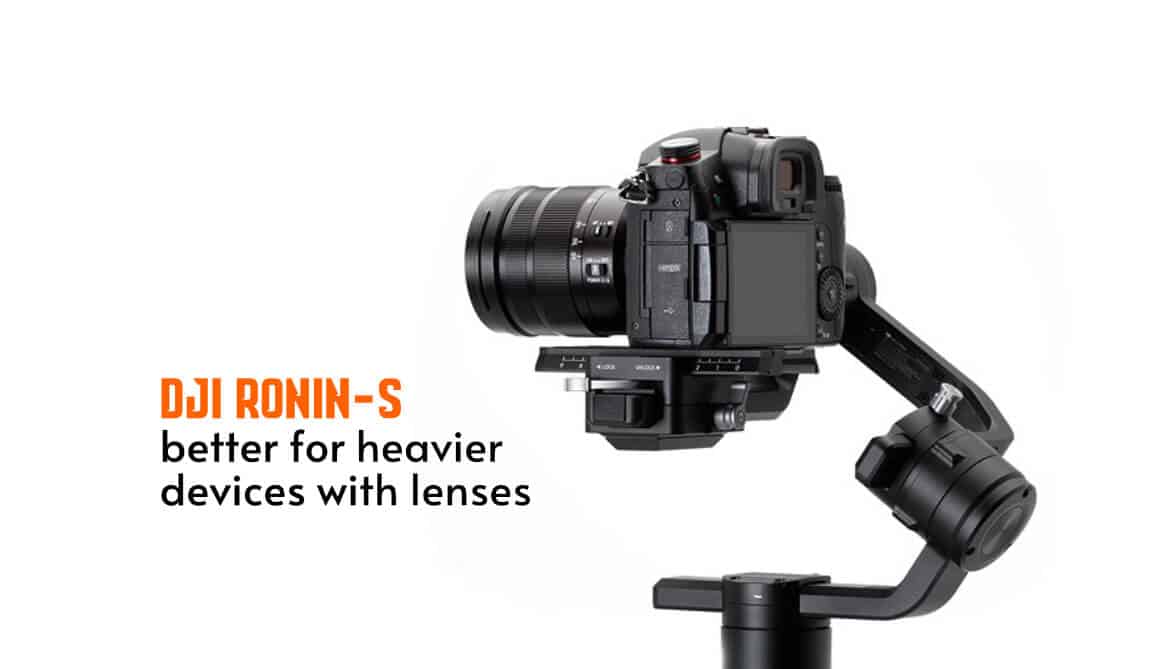 Even if do not intend to use the cameras with a weight of more than 3kg, it might still be problematic for you to use the Zhiyun Weebill LAB with the longer lenses. It is not even because the camera or the lens itself is too heavy. It is rather a problem of the gimbal’s weight distribution, which is “front-heavy”. To make it work properly, you may need to place the camera on the mounting plate to balance it. However, keep in mind that it might hit the motor when going into the underslung mode.

Thus, I would recommend using the Weebill LAB only with the smaller mirrorless cameras. If you need to work with heavier devices with lenses attached to them, you better should choose DJI Ronin-S, whose payload is much more impressive.

It is hard to determine a winner in this category. Both gimbals have a similar compatibility performance. For example, they are both compatible with all Panasonic and Sony mirrorless cameras.

The list of compatible devices might not be final. It is always possible to expect that in the future, both manufacturers will expand their compatibility list as the new updates come available. Thus, I believe, the winner is yet to be determined. Therefore, this is a drawn game. 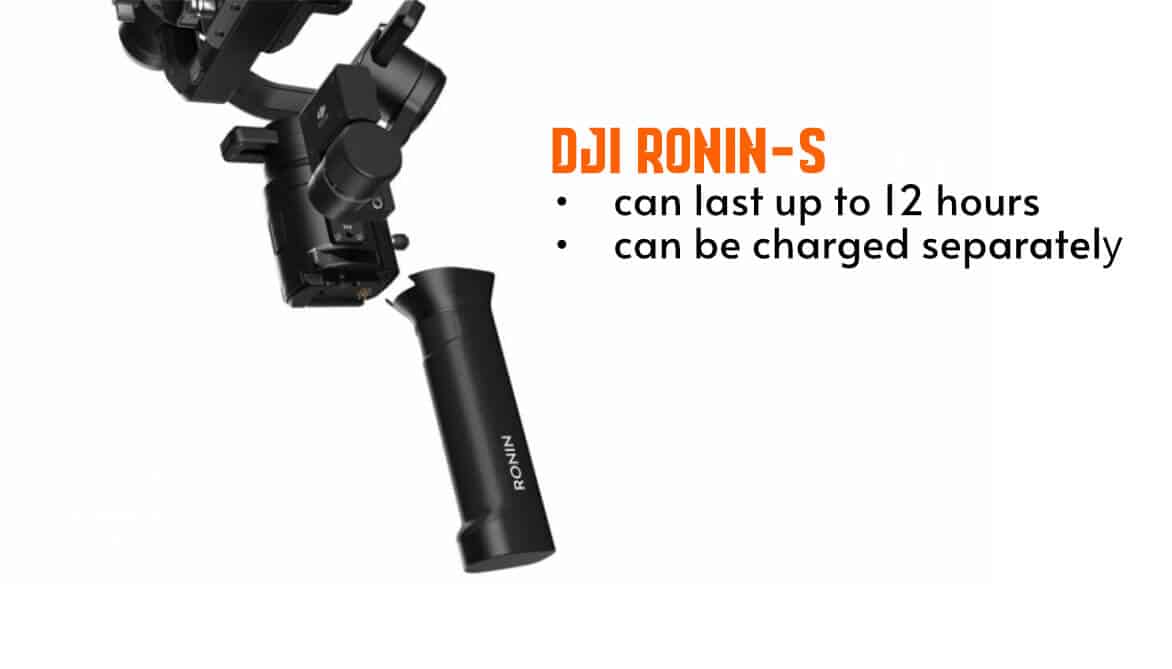 The main advantage of the DJI device is its built-in camera, which is also very strong. According to my observations, it can last up to 12 hours. Another great benefit of this portable camera is that it can be easily removed and charged separately while using your gimbal at the same time. I found this feature quite impressive.

Zhiyun, unfortunately for them, did not do such a great job in terms of its device battery performance. Although the company states that their gimbal’s two portable batteries can live up to 10 hours, many users of the device found those statements exaggerated. In reality, the device can ensure a battery life of 4-7 hours. This would depend on the weight of the camera attached, type of operation, and other filming factors.

As I said earlier, both gimbals feature removable batteries. This means that you can always buy extra ones and carry them with you. Nevertheless, it is worth noticing that the Weebill LAB’s battery cannot be charged separately from the device.

Following my article, it becomes clear that DJI Ronin-S should probably win. I analyzed the most important features of the two gimbals, and it is definite that unfortunately for them, the Weebill LAB is worse than its competitor in many terms. I will always think that the device, introduced by DJI, is simply a great gimbal, providing many impressive features. 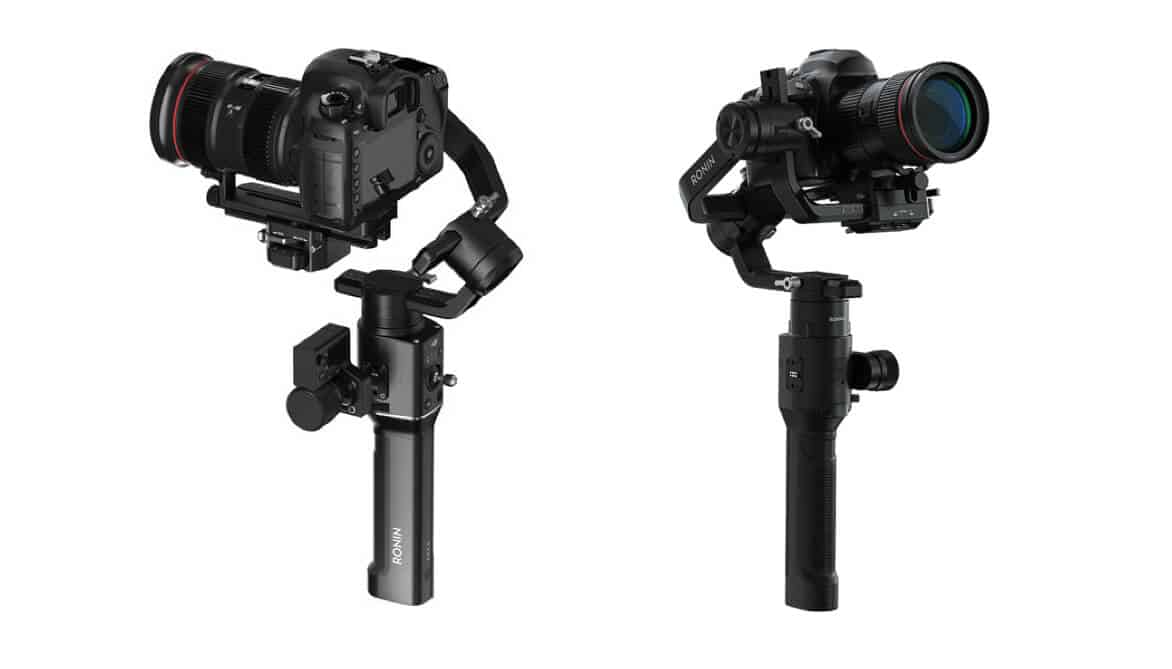 Its battery lasts long and can be charged separately, its stabilization performance is the best, the build quality is impressive, and in addition to it, it is very user-friendly. Those are the qualities typical for more expensive gimbals, but here we have an amazing opportunity to get a great device for an affordable price.

Nevertheless, I think it would not be a fair judgment to say that the Zhiyun Weebill LAB is losing in this competition. It is a different device that is even cheaper than its direct competitor. Also, we need to admit that this gimbal has been produced for a different purpose. 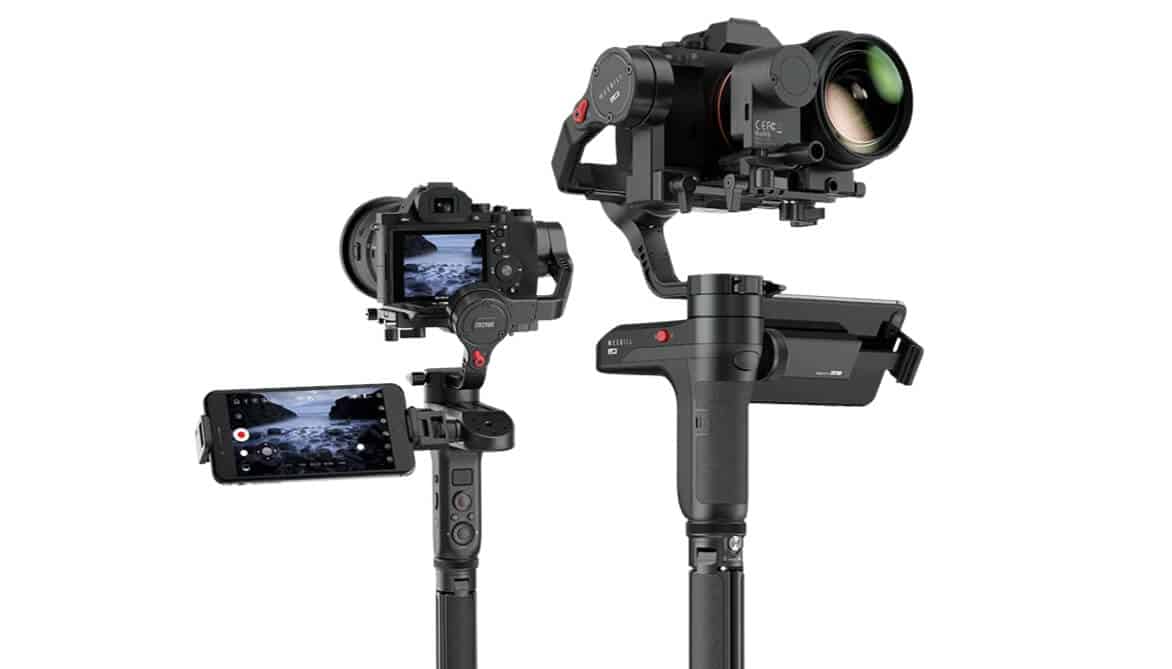 The Zhiyun Weebill LAB is much smaller and lighter than the DJI device. It simply cannot support the same cameras that the second device is compatible with. If you have a small mirrorless camera with a short lens, it is going to be a great gimbal for you.

At the end of the day, it has many advantages, too – it is cheap, it is small, it supports a tripod that can be attached to two different parts of the gimbal. Last, but not least, it features a great stabilization quality and it is compatible with quite many devices.

I personally rarely use mirrorless cameras for my work, as I am used to my Nikon D850 DSLR. Therefore, Weebill LAB is not the right choice for me. But I am sure that if I did use the mirrorless cameras more often, I would have definitely purchased the Zhiyun Weebill LAB gimbal for my professional activity. Moreover, I would have used it is quite often since this is a truly great gimbal.

That is why I am saying that today there will be no winner. After analyzing the two devices, I realized that it was not necessarily right to compare them, as they were simply too different. It is up to you to choose the one you will enjoy using the most. I hope the information provided in this article will help you make the right choice.

Check out my page with all gimbals for cameras.