The Freevision  Vilta-G is a 3-axis GoPro gimbal designed to boost the quality of your videos. My previous experience with this company was a positive one. Its phone stabilizer called Vilta-M set a high bar with its impressive build quality and reasonable price. In today’s article, we’ll see if the Vilta-G is up to the same standard. The gadget comes in a compact carry case with a wrist loop, perfect for traveling. Included in the package are a shoulder strap and a micro-USB charger.

Right off the bat, it seems on par with the Freevision Vilta Mobile in terms of build quality. Its body is mostly metal, while the grip is plastic covered with rubber. It’s ergonomically curved and feels super comfortable in hand.

Like any other  GoPro gimbal, the Vilta-G is compatible with standard 1/4-inch poles and tripods. Surprisingly, there’s also a rosette mount that allows using DJI Osmo Mobile accessories.

Mounting your camera is as fast and easy as it gets. It’s a breath of fresh air for someone familiar with the likes of the  Feiyu G6 and Hohem XG1, which make you fiddle with screws every time. If you have a GoPro HERO 5, 6, or 7, just slide it in the frame and secure it with a locking wheel. For older cameras (GoPro HERO 3 and 4), you’ll have to use an adapter. Luckily, it’s included in the box. 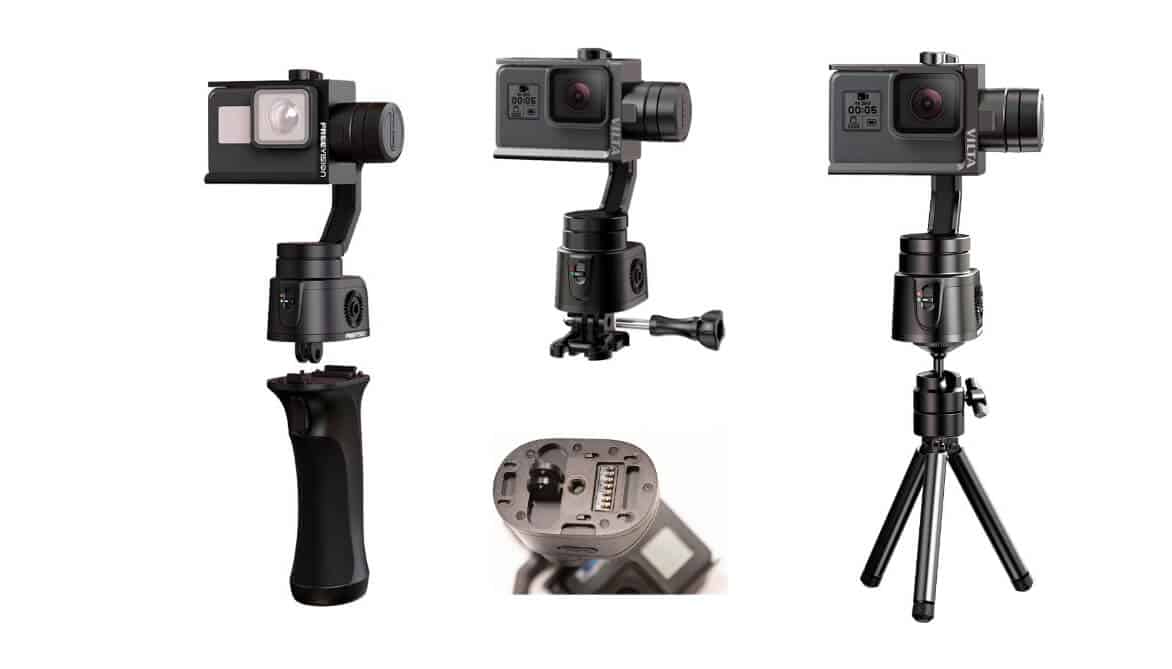 It looks like a regular handheld stabilizer, but you can transform it into a small one, perfect for hiking, cycling, and backpacking. Just press the release button marked “Push”, and you’ll dismantle the main section from the grip. After that, you can comfortably wear the device on your chest, mount it on your bike or your helmet. To reassemble it, slide the two parts together till you hear a click.

Note that there are two independent batteries, one in the handle and one in the wearable section. The charging ports are placed accordingly, so you can use the top while charging the bottom. When the gimbal is in one piece, both parts charge at the same time via the top port.

The idea itself is hardly a revolutionary one: there are other models that offer this feature. The Vilta-G definitely does it better than the  GoPro Karma Grip, which can’t serve as a wearable device without an extension cable. However, the Removu S1 is superior to both of them.

The Vilta-G’s two-in-one design has two flaws. Firstly, after removing the grip with its powerful 2000 mAh battery, you are left with a meager capacity of 350 mAh. This will only last you for about 1 hour. Secondly, the gimbal is rather tall even without the grip. It’s also a bit heavier than most specialized wearable models.

Still, I have to admit that its dual-use capability is a notable and quite rare advantage. 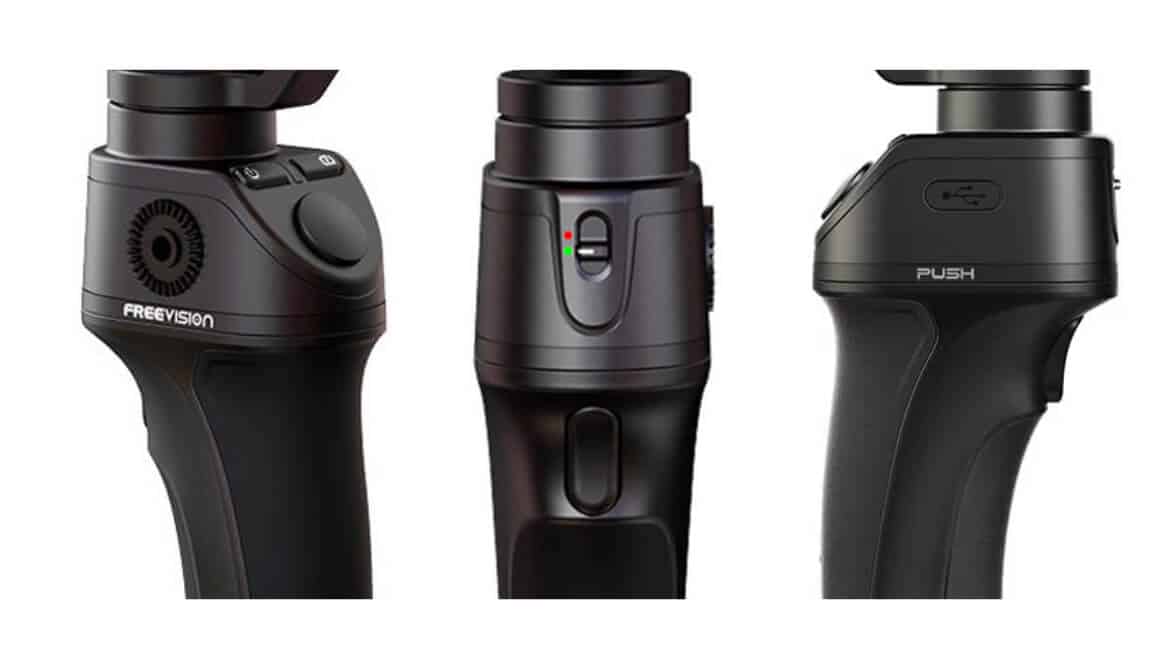 The Vilta-G control system is pretty straightforward. Most buttons are on the wearable section of the stabilizer. The power button doubles as a mode switcher. The shutter button takes pictures, activates selfie mode, turns the record on and off.

There’s also a joystick that allows you to pan and tilt the camera electronically. Personally, I prefer to do this by moving my hand, but this feature might be useful when you want super-steady motions.

At the grip, there’s only a trigger button that switches between different shooting modes. There are three of them:

The Vilta-G boasts a wide range of motion: 360 degrees in the pan axis and -45° to 100° in the tilt axis. Most of its competitors (including the Karma Grip and Removu S1) can’t beat that. However, the roll angle (±40°) is rather limited. 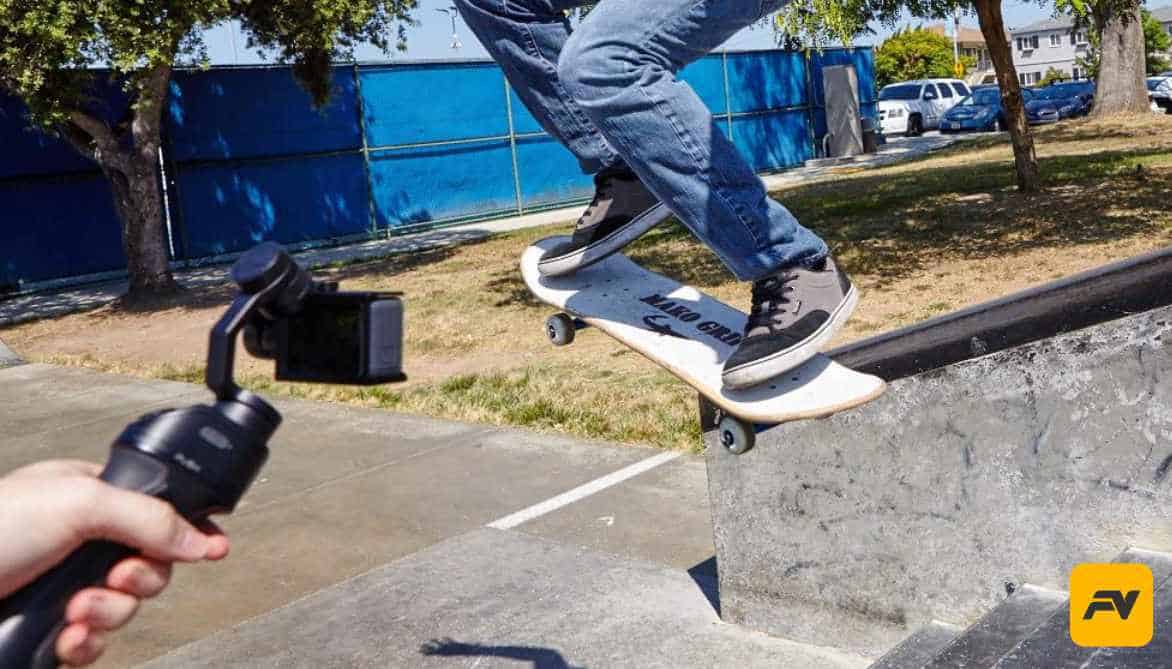 Having thoroughly tested the device, I’m impressed with its stabilization quality. The videos are buttery smooth, practically on par with what acclaimed models like  Karma Grip and Feiyu G6 can produce. To be clear, I still think the Karma Grip is superior, but I had to look closely at the footage to notice any difference. It only became obvious when I zoomed to 20x.

The battery performance also deserves credit. When working together, the two batteries last for up to 9 hours. That equals several runtimes of the GoPro itself. In theory, you can charge it from the gimbal while shooting, but you’ll need a special adapter which is not included.

On the flip side, the Vilta-G’s motors are not completely noiseless, even in the “silent mode”. Their whirring can be heard on footage unless you activate the wind filter on your camera. 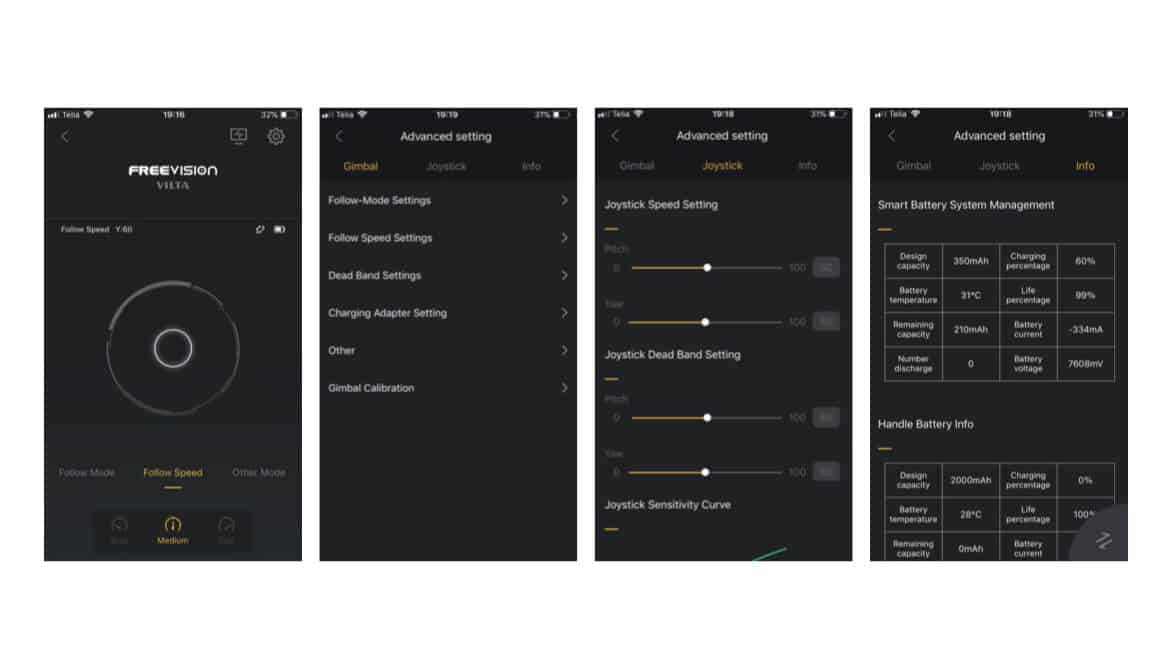 For remote control of the camera and access to some of the settings, you’ll have to use the Freevision app on your phone. Unfortunately, it’s a typical gimbal app, poorly designed and poorly translated from Chinese, on top of that. It doesn’t work as intended at least half of the time. Even the basic task of connecting it to the GoPro took several unsuccessful attempts.

To be fair, it’s no worse than most apps of this sort, but at least more popular brands like EVO and Feiyu update and refine their software regularly. Freevision is relatively small, so I wouldn’t count on significant improvements in the near future.

The Vilta-G is a well-made GoPro gimbal with great stabilization performance. Its double-use design is a blessing for those who don’t want to choose between a handheld and a wearable gadget.

However, the manufacturer’s price policy doesn’t make much sense to me.

At the time of writing, the gimbal is available for $239. It’s more expensive and less feature-packed than the Feiyu G6. Pricewise, it’s closer to the Karma Grip. The latter might be inferior in terms of battery life and less convenient as a wearable device. On the other hand, it beats the Vilta-G when it comes to supporting and stabilization quality. Besides, being GoPro’s own creation, it’s better integrated into the brand’s ecosystem.

Let’s hope for a price cut in the future. If this model becomes available at roughly the same price as the Feiyu G6, I will be the first to recommend it. However, at the moment the Vilta-G definitely feels overpriced, and the RightChoice advises you to wait.

Thank you for reading this review!

If you want to learn more about the best gimbals, check out this article as well.