The Zhiyun Weebill, a new impressive gimbal released recently by the popular gimbal company, is the subject of today’s discussion. As always, in this review, I am going to analyze the device according to certain features, such as its qualities, shooting modes, the build quality. I will also compare it with another popular gimbal, DJI Ronin SC, and draw final conclusions about this device. 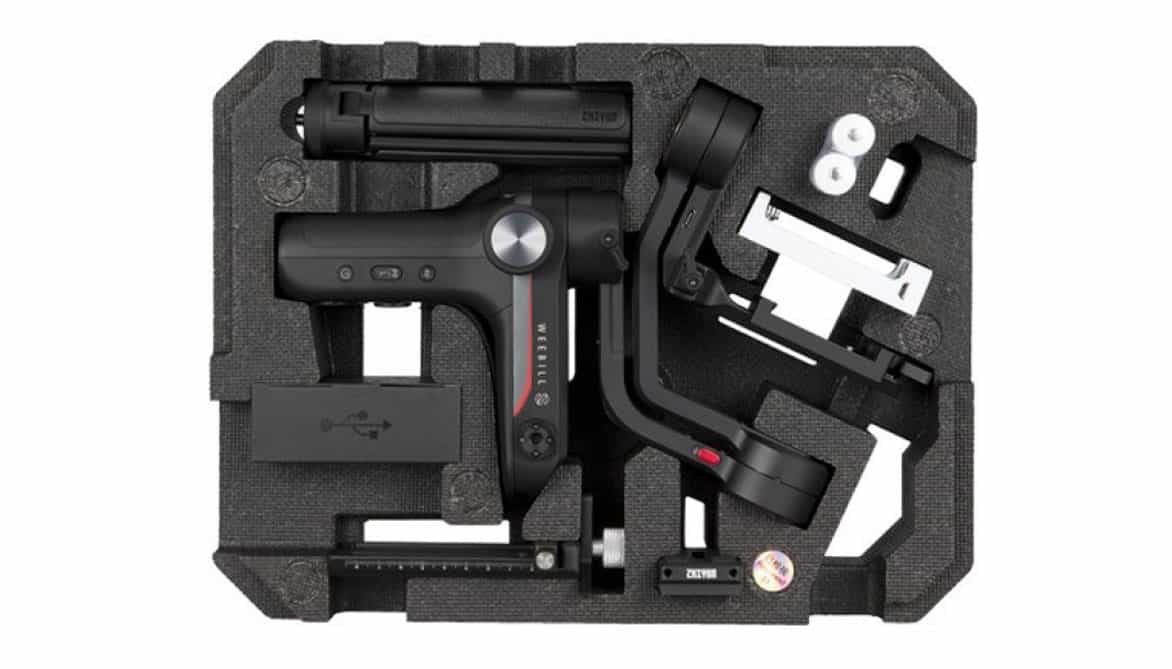 Over the past few months, Zhiyun has become a popular manufacturer of gimbals in the market. It has been releasing those devices so extensively that many customers are still not sure which gimbal they have to choose now. All those devices are new, they demonstrated certain great features and high compatibility with other devices; and I’ve got to admit that they look quite good too.

The market is now preoccupied with Zhiyun gimbals. The quite famous Weebill LAB was released more than 2 years ago; since then, the Crane 3 LAB and Crane M2 saw the world. I am only talking about some of Zhiyun’s gimbals now, and believe me, they have got much more to share with the world.

Now Zhiyun is happy to introduce its another gimbal, the Zhiyun Weebill-S, the follower of Zhiyun’s previous model, the Weebill LAB. The majority of users would choose this device over the others, and their choice is easy to explain. The Crane M2 model is a bit too specific and designed for a certain group of people; while the Crane 3 Lab is too pricey and clumsy for every-day use. The novelty, introduced by Zhiyun, is quite compact; at the same time, it is a great device for professional use.

There are a lot of discussions, whether the Weebill LAB needed to have a successor so soon after it had been released. The original gimbal became a best-seller and quickly became more popular than its direct competitor – DJI Ronin SC, bringing a good profit to the manufacturer. Nevertheless, I still believe that it was a good idea to produce the Zhiyun Weebill-S, especially if it is good as it seems. Let’s look at it in detail and find out. 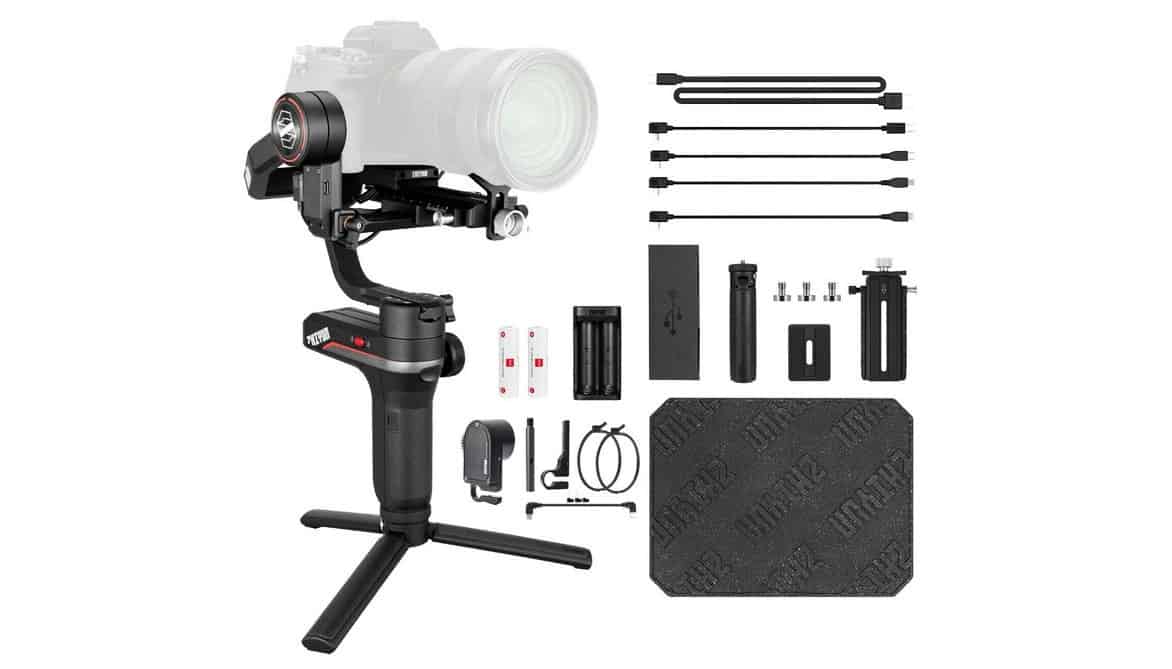 The 3-axis gimbals, which used to be popular some time ago, are no longer considered the hottest devices. The main feature of a good gimbal is pretty simple. It needs to do a good job in stabilizing the video, and most modern gimbals do it quite well.

The Zhiyun impressed most of the users with their original Weebill LAB when they decided to step back from the standard gimbal design. Instead of using an ordinary pistol-like grip, they added an extra handle at the back of the device. This way, they made it possible to use the gimbal with both hands and perform the low-angle underslung easier. It is good that the new gimbal also features this characteristic. 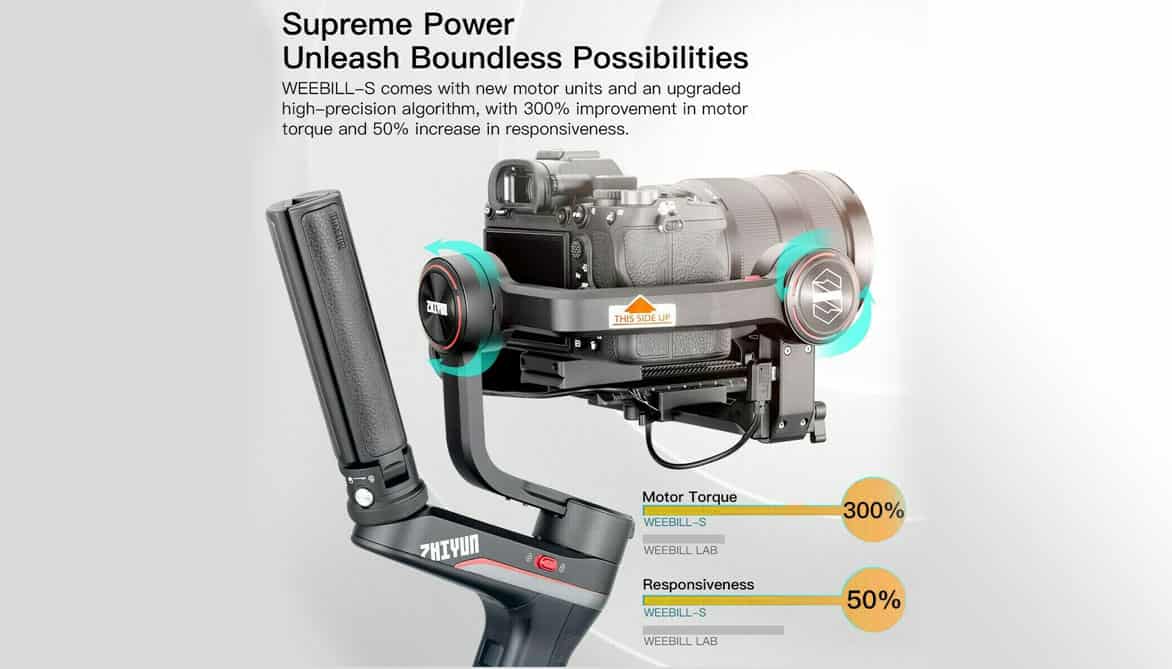 The greatest advantage of the new Zhiyun Weebill S is its motor torque, which Zhiyun has increased by 300 (!) percent. It also features responsiveness, which Zhiyun has increased twice. The new model of gimbal has a great payload, which enables it to work with heavier cameras. Indeed, it is highly compatible and can be a good companion for even the Canon 5D Mark IV DSLR with a 24-70mm f/2.8 lens.

The gimbal arms are much longer now; it ensures that the gimbal holds a necessary balance when paired with heavier devices. The new Zhiyun Weebill S does a great job working with different cameras, which was the main disadvantage of the original model.

Another new important characteristic is that now you have to buy the wireless transmission system separately. It was built-in in the gimbal’s original version. On the one hand, it might be a good thing, since you are getting a separate excellent system that you could use with other devices. However, most of the time, people do not like buying extra things and spending extra money on their devices. So this novelty might be disappointing for some users. 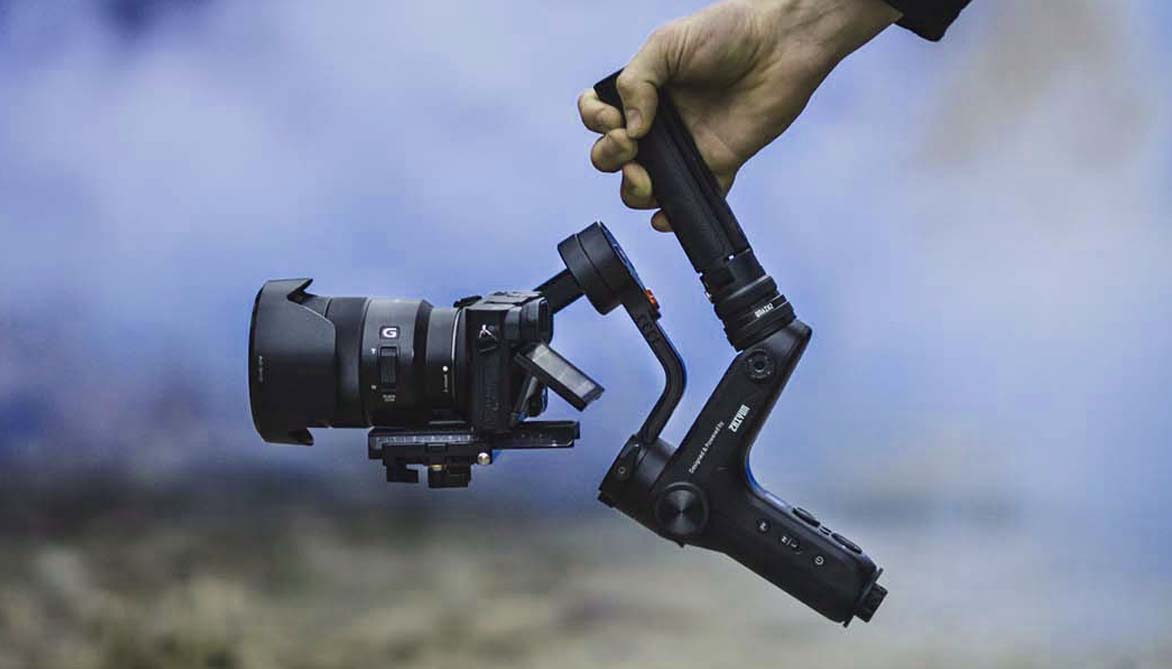 The Zhiyun Weebill S allows you to quickly switch between various modes, as it has special buttons designated for this. In total, there are five filming regimes.

Pan-following: the gimbal follows the objects placed on the horizontal axis, but at the same time, it keeps the horizon steady.

Locked: the three-axis are blocked, the device keeps pointing in the same direction.

Following: the camera follows all movements, keeping the horizon steady at the same time.

POV: the camera follows completely all movements, giving you an opportunity to make a truly creative shot.

Go Mode: this regime enables you to follow any fast-moving objects.

Vortex: this mode lets you make the spinny shots that are so popular nowadays. You might not need this regime every day, but it is still nice to have this opportunity.

The Zhiyun Weebill S is a perfect example of a great mirrorless gimbal that has been improving significantly lately.

It is a pure enjoyment to install the camera on it and achieve balance. Due to its extended arms with individual locks, it is getting very easy for you to find the right balance and to keep things simple and quick for you when setting everything up. The Zhiyun also made it possible to isolate each axis and balance your camera quickly. The new device has a quick release plate, which allows you to unmount and remount the camera very quickly every time you need to use it.

The new design of the grid makes sure that the gimbal’s motor will not get into your frame while you are shooting. It is becoming more common now; however, Zhiyun did a very good job protecting your frame due to the extensively long rear-arm.

Shooting videos with Weebill S are very satisfying and natural due to the availability of the second grip. I realize that filming with standard pistol-like grips did not give me this much freedom. Using my two hands for making videos allows me to make my shots more complicated and interesting. I no longer feel exhausted after a long shot, as I do not need to hold heavy equipment with one hand.

In addition to all its advantages, this gimbal is really easy to manage. You can adjust the settings and change the filming modes by simply pushing the dedicated buttons. When using other gimbals, you would normally have to use your phone most of the time to adjust your filming settings in accordance with your preferences and needs.

I did not find many things that I did not like about this gimbal. As I said, this gimbal is very impressive with its stabilization performance, great build quality, and compatibility with other devices. Nevertheless, there is one thing that I did not particularly like.

The small grid was not long enough. It does not fit quite well and you need to use the tripod to feel comfortable. Zhiyun has even designed a special tripod to use as the extension for this grip. In fact, this is another accessory that you have to buy separately and spend your money on. It might not be a big deal, but the longer grid would make this device simply perfect. 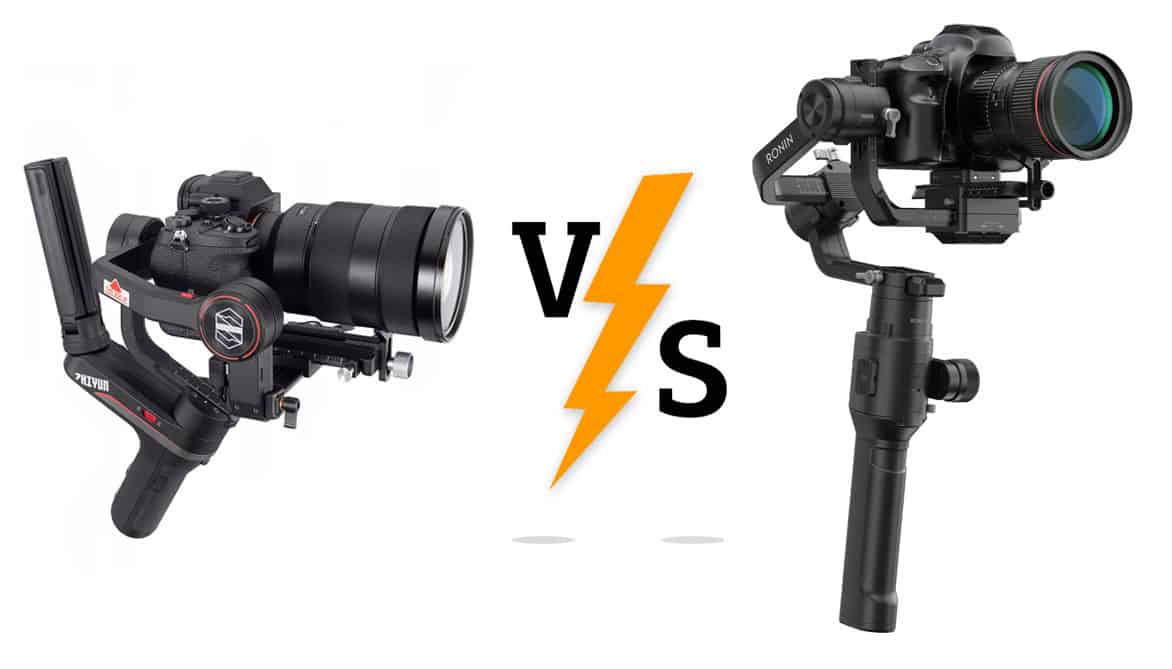 The DJI Ronin SC is, no doubt, the direct competitor of Zhiyun Weebill-S. Both devices have received good reviews, share similar characteristics, and are popular in the market for filmmakers. No surprise that many readers would want to see a comparative analysis of these two devices. It might be a great help when choosing the right device for you.

The Zhiyun device is not as heavy as the DJI Ronin SC is. In addition, it is smaller. Nevertheless, it is compatible with heavier cameras. Unfortunately, the DJI Ronin SC does not support heavy devices, instead, you would need to choose the bigger Ronin-S gimbal. Thus, the Zhiyun Weebill S is smaller, more compact, it can easily fit in your backpack. At the same time, you can use it with more devices, which definitely makes it a win-win gimbal.

Zhiyun also provides a hot-shoe for accessories, while DJI Ronin suggests buying it separately as an extra addition to your gimbal.

Another thing that is important for me and that I personally like is the availability of the dual grip on the Zhiyun Weebill-S. I have already mentioned in this article how great it is. It gives you the freedom and an opportunity to express your creativity easier. The normal single grip models make you exhausted quickly. Besides all of this, the dual grip lets you work with heavier devices more comfortably.

There are still some features that DJI Ronin SC manages to do better. The DJI mobile application is steady and easy to use, while the Zhiyun app is not there yet. Their application is buggy, and sometimes you might be frustrated to see your app shutting down during an important shoot.

Otherwise, it is hard to identify a clear winner. The stabilization performance is pretty good on both devices; both batteries are strong enough. Even though the Zhiyun Weebill-S’ battery seems to be a little better (14 hours again 11), in reality, they work almost the same way.

To draw a conclusion, there is no winner in this competition. The DJI Ronin SC definitely has a better mobile application, while Zhiyun Weebill-S has better hardware equipment. When considering a purchase, you will have to decide which aspect is more important to you.

I have to admit that I am extremely impressed by the Zhiyun Weebill-S gimbal. It is a great device for mirrorless cameras that I do recommend for all video professionals. To be honest, I had a feeling that Zhiyun was making a big mistake producing this many gimbals lately. Those gimbals appeared to be not perfect fundamental devices, but rather cool stabilization equipment with unnecessary gimmicks.

However, the Weebill S has proven that Zhiyun has a great potential to produce great gimbals. High compatibility, support of heavy devices, long battery life, a dual grip that is easy to shoot with, comfortable camera installation and balance adjustment, and, of course, great stabilization features. This gimbal is definitely worth considering as your next stabilization companion.